movie: Mary Shelley's Frankenstein (1994)  starring Kenneth Branagh and Robert De Niro.
plot: When an explorer finds his ship trapped in ice at the northest point of the then known world, he is startled to discover a man half frozen. When he takes him aboard, he learns the man's history.  Victor Frankenstein having lost his mother in childbirth when she had his younger brother, becomes obsessed with the idea of cheating death at all costs. He begins studying the works of both modern medicine and the known occult philosophies. He hides himself away in his lab, at first reanimating dead tissue in small animals, but eventually moving on to the idea of reanimating the recently dead. (this comes after yet another lost love one) His single minded obsession leads way to him becoming sick, and taken away from the university by his best friend and his step-sister; Elizabeth. Unknown to them, Victor had been successful in creating a new lifeform, which he's run in fear from. We then see the world through the eyes of the creature, as he learns to survive on his own while having to hide his injuries. Before long, the creature demands that Victor create a mate for him, and swears that he will not rest until either he is allowed to have what Victor has or takes it all away from Victor in rage. When Victor tries to outsmart the creature by secretly marrying Elizabeth, the creature retaliates by killing Elizabeth. He then demands that Elizabeth be used to create his own mate. Succeeding in this against his will, Victor claims the newly reanimated Elizabeth for his own, but she understands what has happened to her and kills herself. The two men are then left running from each other in a battle of wills.

I have to say, one of my favourite scenes has always been the creature's revenge when he rips the heart out of Elizabeth.  Another is when Clerval introduces himself in the street after the lecture, complimenting the coat and Victor says "I am not mad". There is just something so perfect in the comedic timing between the two.  Is it wrong to admit that Clerval is one of my favourite characters in the movie version?  He's the perfect combination of silly sidekick and serious conscience. ("Dear diary why does no one understand me? P.S. I am not mad!")
You also have the stairs scene, where Victor is carrying the dead Elizabeth up this winding staricase in this blood red robe (a toss to the fact they used the same set from Dracula) It puts you in mind of some demonic-angel ascending from hell.  This is his big F-U to everyone, throwing all logic and ethics out the window by brazenly admitting to what he's been doing. No longer even trying to hid the fact he's been messing around with stuff he maybe shouldn't have.

Besides wanting the trenchcoat he wears in the beginning (and later worn by the creature) I always wanted the journal Victor keeps. There is something about the idea of a book of all knowlegdgefullness...

Here is a man who is caught between the knowledge he's gathered of the occult and the modern Christian concepts of God. His desperation leads to first his faith in extending life, then to his obsession of "gathering the raw materials" to prove it can be done. He bucks the limits of the then modern medicine when he knowingly says that to grant pain free/death free life was a risk worth any consequence.

It's interesting that they set the movie during the time of a plague, given that vampires were often "blamed" for many of the plagues that happened.  The use of birthing fluid and electricity is brilliantly used here to help "kickstart" the reanimation. Electricity, although connected to the Frankenstein movies, was never really touched upon in the book. (there is one scene in the book where Victor is transfixed by a thunder storm and a dead tree)
We see how Victor's single minded obsession also leads to his illness and depression. He's fallen to his own madness and half wasted away. (visually putting you in mind of a vampire)

Right off, I'm having issues with the photo and I have no clue how to flip it in the post here so yeah it's sideways... 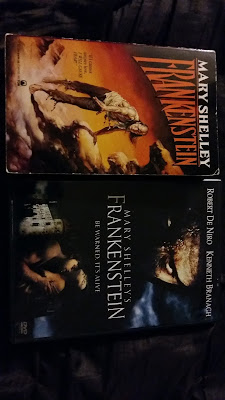 Book: After the death of his mother, Victor Frankenstein, goes off to university where he quickly becomes obsessed with the idea of the "natural sciences". After devoting nearly four years of his life to the study of what some would consider metaphysics, he begins to question the reality of heaven, hell, lifeforce and creation. Consumed with the idea of a stronger man created not from the natural connection of sexual relationships, but from the idea of expanding on the evolution of what is already, he begins to reanimate life into dead tissue. When faced with his creation, the truth of what he has done, of what human nature is capable of, he flees in fear. When his best friend Clerval arrives at the university, he finds Victor near death from illness and exhaustion. The evidence of Victor's addictions long since disappeared. When they decide to take a trip back home, to visit the family, they learn that Victor's youngest brother has been murdered, and their adopted sister Justine is accused of the crime, Victor knows without a doubt that his creature has done this for revenge. Meeting with the creature on a remote mountain top, the creature asks one thing of Victor, to end his suffering and create a female for him. When Victor refuses, the creature begins to kill off each of the family members till there is no one left to protect.

It's been a few years since I last read this, and I have to admit I had completely forgotten about the side story midway regarding the "French family and the Arabian wife", that the creature tells.  It shows a lot about the types of stories that were popular at the time of the author's writing (such as 1001 Nights,  where the anthology style was becoming popular. Where you would have one storyteller giving you different tales)

Frankenstein is a story of obsession, vice, fear, faith, disillusion, and ego.  While the character of Frankenstein sets out to explore the inner world of humankind, the character of the creature sets out by no fault of his own to discover the outer world. Each as lost and disgusted by what they find.

I always saw the relationship between the two leads as that of a sire bond. There is actually a scene in the book where Victor refers to the creature as his own vampire, when he realizes that the creature is trying to destroy everything he loves. The story refers to them as Father-Son, God-Adam, God-Satan,  style relationships. But, in it's own way, it's as if we are looking at a split personality, one of innocence gone wrong. Each is left struggling with their need for family and a place to fit, neither finding it. That is, until it's too late. It isn't till faced with their own deaths, that each seems to realize how much they are devoted to the other.

The level of manipulation going on between the two, is much like that of Dracula and Renfield, or even Dracula and Harker. The creature puts the worst fears into Victor, knowing his threats are the only thing holding any sway over him. The only difference here is that the creature doesn't do what he does out of ego, he does it out of grief.  There are moments in the story, where Victor has lost all reason, all hope. He's emotionally and physically weak, drained having put all his time, effort, energy into either making the creature or running from his fear of the creature. This is one of the biggest examples of the classic folklore vampiric relationship. The totally absorption of self into the ego of another. (there is also the nod to the fact the creature mostly only moves around by night)

Besides the fact the story deals with having a god-complex, the metaphors for loneliness and self-destruction are two of the most common we see in vampire stories. The two main characters, Victor and his creature, are both dealing with an extreme level of isolation. Neither being able to accept fully that they invited it themselves. Victor by his obsession to recreate life and the creature by his obsession to fit in.


Okay, so I'm going to shut up now and point you to Heather's blog All Roads Lead to the Kitchen, so you can see what she has to offer on the topic.

Next month, we're rounding out the year with Dracula both the book and the 1992 movie version Bram Stoker's Dracula. But I'll be back later in the week with the official post on that.

Posted by Domestic and Damned at 8:53 PM