The last combo of the all vampire movie book club for 2016, is Dracula  and the 1992 movie version Bram Stoker's Dracula.

movie:  Starring Gary Oldman and Sir Anthony Hopkins.
plot:  1462, and there is a war between the lands of Vlad Tempes and the Ottoman Empire. Vlad manages to turn the Turks back away from his lands, but not before is wife is tricked into believing that he was killed. She then commits suicide, damning her soul in the eyes of the church. Vlad Dracula, then in a violent fit of depression vows to return from the dead to take revenge.  1897, London and we see Johnathan Harker, who has just been given an assignment by his new boss of traveling to Transylvania to meet with a Count Dracula, in order to deliver deeds to his new properties. Harker, leaves behind a new fiancee; Mina, to make the trip where he is kept prisoner by the Count. Mina, meanwhile, is staying with her childhood friend, Lucy for the summer. Lucy, agrees to marry Lord Arthur Holmwood (after turning down his two best friends Dr. Jack Seward and Quincey Morris) After a letter arrives from Harker, Mina wonders if he's in fact alright, but her attention soon is taken completely by a Prince Vlad who has arrived in London. Meanwhile, next door to Lucy's house, is Dr. Seward's insane asylum where R.N. Renfield; the lawyer who had Harker's job before him, is being kept. Seward has a close friendship with Renfield, which proves interesting as the story progresses. Lucy, while sleepwalking one night is attacked by a werewolf-like creature and begins to act out. Dr. Seward then requests help from Professor Van Helsing. He preforms three blood transfusions on Lucy, but she ends up the victim of the Prince after Mina leaves for Transylvania to be with Harker.  The men (Van Helsing, Seward, Morris and Holmwood) then proceed to track and destroy Lucy once they learn she has become a vampire herself. When Mina and Harker return to London, they learn that the Count is a vampire, and Mina his original choice of victim as she is the reincarnation of Vlad's dead wife. The group try to save Mina, by hiding her in the asylum, only to cause Renfield's violent death by Vlad, and then chase him from London back to Transylvania for a final showdown.

So some of my favourite scenes are the shaving scene when Dracula breaks the mirror, the seduction of Harker in the castle by the three brides, Lucy running down the garden stairs screaming "I love him, I love him",  Van Helsing asking Seward for the knives, the love scene between Mina and Dracula, and Lucy's werewolf rape scene.

Van Helsing  - "Jack, I need for you to get for me before nightfall, a set of post-mortem knives."

Van Helsing- "No, no no, not exactly, I just want to cut off her head and take out her heart...Jack Jack!"

I like the parallel going on in this. We have Lucy with her three "husbands" Arthur Holmwood, Quincey Morris and Jack Seward; while Harker has the three "brides" who are actually un-namned. Both are being "seduced" in their own way.  Then, tipping the scales, we have Mina with her three love interests as well in the form of Harker, Dracula and to a level Van Helsing.

Both the movie and the book bring up the idea that by exchanging blood, a form of marriage has occurred. Arthur Holmwood is the one who mentions it in regard to himself and Lucy, unaware (in the book anyways) that Van Helsing, Morris and Seward have also "fed her" their blood by medical means. You then see the sire bond beginning to take shape between Dracula and Lucy, and later Dracula and Mina. With the emphasis on the psychic/empathic connection. (a big trait in folklore on the proof of vampires)
The movie drops a lot of the folklore, such as the fact vampires can not cross running water (the book deals with this element - no pun intended- by having low tides and running boats aground) 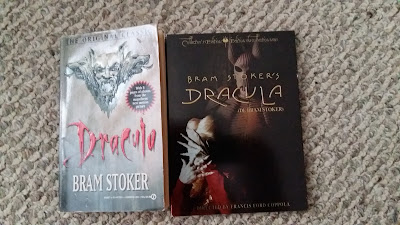 The book:  Johnathan Harker sets off across Europe, to meet a Count Dracula, in order to hand over the deeds to a series of properties around England. The Count, at first is pleasant but after awhile, begins to become shifty. He even goes so far as to steal Harker's clothes locking him in a high tower room. After escaping his rooms, Harker wanders the castle and discovers what at first seems like three ghosts, but are in fact vampire women. They attempt to trap him by seduction, only to have the Count threaten them for it. Harker then witnesses their true nature when he sees them devour a child. Again, he tries to escape only to find the vaults where the Count has begun collecting dirt in large boxes, and the Count himself sleeping in one. Meanwhile, back in England, Mina and Lucy are on a trip to Whitby. Lucy's mother is gravely ill and the two girls are doing their best to keep calm but it's wearing Lucy down causing her to sleepwalk. One night, she sleepwalks out to their favourite spot, while a storm has happened just the night before, causing a ship to run aground. Lucy is then attacked unawares to herself and Mina. Lucy, then starts to become sick herself and they return to London. Here, we meet the three men who are in love with Lucy, Dr. Seward, Arthur Holmood (Lord Godalming) and Quincey Morris. She quickly becomes engaged to Holmwood.  Mina is then pulled way from England by a letter from a convent in Romania, letting her know that Harker was found wandering with a brain fever. Meanwhile, Dr. Seward who is self medicating over his depression, is giving special attention to one of his lunatics, R.N. Renfield. Renfield keeps escaping his cell and running to the empty house next door. Seward ends up having to ask his friend Van Helsing to come help out with Lucy. Within two weeks, Lucy's mother dies of a heart attack, as does Holmwood's father. Lucy then dies of extreme blood loss. This causing the men to follow stories of  'the white lady' and the fact a sudden rise in children disappearing only days after Lucy's death. They soon learn she is a vampire and destroy her. Mina and Harker then return to London, to learn of all this. From the many letters and diary entries that everyone has kept in the long five months, Van Helsing pieces together what has happened and that they are looking for a real vampire. Tracking the Count down to the building next to the asylum, they begin to purify the boxes of dirt. While this is going on, Renfield is murdered in his cell, and Mina is attacked in her bedroom. The group then travel to Transylvania chasing the Count for the final showdown.


There are a lot of differences between the 1992 movie version and the original 1897 story. Such as, the movie has added much more of the idea of Vlad Tempes, where the book just touches at it. The movie added the entire reincarnation idea, the vampires have less weaknesses in the movie than they do in the book.  In the book, Renfield as far as we know, was never a lawyer or in Transylvania; in fact he doesn't meet Dracula until near the end of the book when he's killed.
The movie has Mina still in London when Lucy becomes gravely ill and meets Van Helsing just before she goes off to rescue Harker, where as the book does not.  Dracula himself, has very little scenes in the original novel, as Seward and Van Helsing are the real main characters.

The book, though is a classic gothic novel, it's also a bit of a crime story which were becoming popular at that time. A lot of the story has the group making plans over breakfast or dinner, or having the characters tracking down information/leads; which drags the story out for nearly nine months.

Something I have always wondered about the novel, is if it was meant to be a serious book or a bit more comical? There are paragraphs where Van Helsing is babbling in what seems like complete sarcasm. Not too mention Mina's constantly commenting on "brave men...men's work" etc. You almost wonder if Stoker wrote it tongue in cheek or if he was serious about his social concerns?
The men in the novel are appalled by the fact that the women are more aggressive, voluptuous, and calmly confident when death/near death after having been in contact with the Count. At certain points, all of them physically turn away disgusted by the sight of their beloved in the "trances", when they are more "live"; and calmer when both Mina and Lucy return to a more compliant frame.

Some of the themes in the novel are fear of foreigners/foreign lands, mental illness, equality, sexual repression, religion/superstition, status, plagues.

Okay, I have to admit, given the hundreds upon hundreds of essays and literary studies done on this novel, I don't know if anything else I have to say right now, will measure up?  So this is my end for this topic. I must admit, because I've referenced Dracula all year in comparisons/examples of the other book club selections, I feel like I've covered all I can at this point.

Doing Night Bleeds this past year has been an exercise for me in my biggest obsession/hobby/studies. I'm grateful for anyone who joined in with me, who read what I had to say, who might have picked up the movies and book reading/watching along with me and Heather (I think she's got a take on this coming? I will post a round up if/when she does)   I am still tossing around ideas for doing Night Bleeds in 2017, so if anyone is interested...

Posted by Domestic and Damned at 9:56 PM