So the selections combo for this round was the Russian fantasy Night Watch by Sergei Lukyanenko, and the movie version.

Book: Anton is a member of the Night Watch, a group of Others who police the streets in the name of Light magick. His talents include being a magi and Seer, as well has his more mundane skill of being a computer analyst. His biggest assignment to date is tracking down a large vortex and stopping it. Which seems simple enough at first. But, he ends up getting mixed up with a couple of rouge vampires who have kidnapped a young boy -Egor. Figuring out that the vortex was accidentally caused by a female Other- Svetlana; who's unaware of her real powers, he manages to calm her down and disarm the vortex. But, not before learning that he himself is the bait of a much bigger plan. Both his own boss and the boss of the Day Watch -the Other's who work with Dark magick - are after both the boy and the female magi. Each connected to the next like a small piece of a much bigger puzzle.
Meanwhile, a serial killer is on the loose, killing only members of the Day Watch. The murders are then blamed on Anton. As Anton goes undercover by switching bodies with a female co-worker, he finds himself once again the pawn in a larger plan still unknown to him, as he is put in the path of the serial killer twice in one night. It's soon learned that the serial killer was indeed an Other designed to become the Judge. One who is neither light or dark.
To make matters worse, Anton's bosses are aware that the young boy who's destiny has not been chosen, was meant to be the greatest magi the world has ever seen.  Anton learns almost too late that he is the missing key element designed to push Svetlana into an extreme emotional state which will accelerate her magick powers. This is then channeled into her ability to rewrite a new path for Egor; allowing him to be shuffled from darkness to light. When Anton figures out his part in the bosses plan, he removes himself from the group leaving them to come to terms with it.

We actually have three kinds of vampirism happening here. Blood drinkers, energy sifters and old fashion manipulation. The fact the Day Watch, who work with the "dark energy" do so by taking the emotions from normal humans and turning them into energy for spells, falls into folklore of what a vampire really could be, and why witches were feared as being able to become vampires after death.

All the characters are technically "vampires" be they witches/seers, shapeshifters or vampires as all the characters gain their powers by "tasting" the emotions of humans. Be them "light" or "dark".

The Night Watch boss, is as much a bad guy as the actual bad guys are, because he has seen how everything is going to play out, and decides to take things into his own hands, turning his watch into pawns for slaughter without telling anyone what his end goal is. He lies for the greater good, destroying so many lives in the meantime. 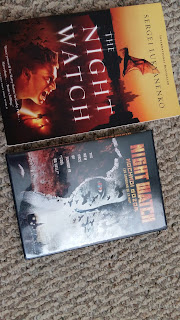 movie:  The rulers of two fractions, the Dark and the Light, are seen battling on a bridge in the middle ages, their knights slaughtering each other. A truce is created by the two warlords, declaring a divided agreement to keep humans out of their affairs.  We then fast forward to 1992, where a young man has gone to a local witch doctor in order to get his wife back. She had cheated on him, choosing the other man over him. The witch doctor tells him she can do the spell to reunite them, but also that the wife is pregnant with the other man's son. In order for the spell to work, Anton must agree to allow her to kill the child. He begins to refuse, but gives in. Before the spell can be completed, a group of invisible men arrive arresting the witch doctor and informing Anton he himself is a Seer. Fast forward another 12 years, and we see a young boy being lured by a couple of young vampires. Anton, now a member of the Night Watch, is tracking down the two rouge vampires. He manages to kill the male, and injure the female. But Anton is hurt in the battle, and his boss has to use magick to heal him. In doing so, he learns that while Anton was tracking the vamps, he crossed paths with a woman in the eye of a storm. His boss tells him about an old legend that prophecies the return of a curse that will start be the catalyst for the shift in power. Warning Anton that everyone is in danger, he partners Anton with a shapeshifter. Anton and Olga then begin tracking the woman, and the young boy Yegor; to stop the prophecy from happening. Anton, learns during his investigation that Yegor is his son. Before long, Yegor is captured by the rogue female vampire, who demands revenge for Anton having killed her husband. Yegor learns the truth about Anton being his father, and turns his back on him, choosing to be part of the Day Watch.

This is the 2004 movie starring Konstantin Khabenshy and Valdimir Menshov.

The big difference between the two stories, is that the movie only covers the first 200 pages of the novel. As the female vampire, has a small role in the actual novel but is a main plotline in the movie.

The movie also, down plays the role of the (dark side) Day Watch's boss to a few short scenes. We see him mostly sitting in a room playing a video game. Which we learn is how he actually figures out how the situation can go by "playing out" every possible path. The novel has him with a much heavier role. Both have him as a sympathetic character and is one who seems to tell the truth all the time. The idea being, you can do more hurt with the truth that's been hidden, than you can with a big lie.

Both the movie version and the novel play out the idea that everything is connected and therefore nothing is ever by chance. Something that you do now, will have large consequences down the line. The idea of free will is heavy here too. It draws parallels to how governments have tried to unify society over the years; comparing the characters manipulation to this.  Which once again, comes back to the big theme of vampirism.

That's about all I've got for now, I'll be back later in the week with the announcement for the October selection.