Spudguns!, it's that time of the time again, when  I offer you up something for Foodn'Flix.  This month's selection is The Guernsey Literary and Potato Peel Pie Society, and it's being hosted by Culinary Adventures with Camilla.

plot: A young writer looking to switch genres, is asked by her publishers to write about how literature is affecting people. At the same time, a strange letter arrives for her from a man who has inherited one of her old childhood books. He explains his situation, that he's started a book club, and is in need of more books asking if she'd mail him something. Not only does she mail him a few titles, she decides to travel there herself to do her essay on the book club. The night before she's set to leave, her boyfriend asks her to marry him. Unsure if that's really what she wants, she ends up staying more than a month with the book club finding out more and more about the people of the small community.

This is based on the novel, and stars Lily James and Michiel Huisman.

So I saw this a few months back, and loved it. But when watching it a second time around for the FnF group, I had little idea how to do anything out of the ordinary for it. I ended up going with a fairly basic idea.

A potato bread. My inspiration was both the main food of potatoes, which is about all the people in the community have left to eat after the German soldiers pretty much take all the supplies; and a scene where one of the characters asks for the last slice of bread to help prove a point. 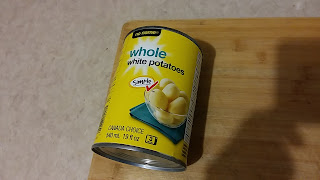 I decided to use a can of potatoes for this, simply because I had them on hand.  I drained them, and boiled them in salt water for about 15 minutes, then mashed them.  This I set aside to cool. 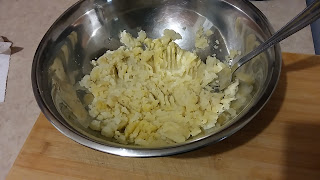 While that was cooling, I got the rest of my ingredients together.  1 and a half cups flour, 1/2 teaspoon salt, 1 Tablespoon sugar, 1 Tablespoon oil, 1 teaspoon butter softened, 1/2 cup water. 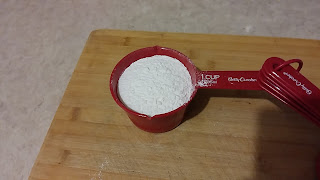 Add this to the mashed potato, and then kneed the dough as you would a normal bread. 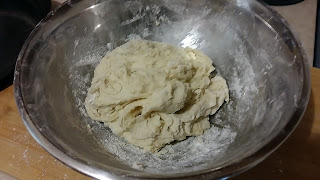 Bake at 350degrees for about an hour depending on your oven. 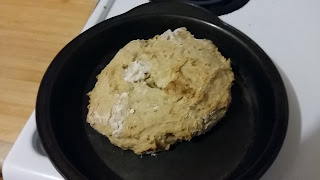 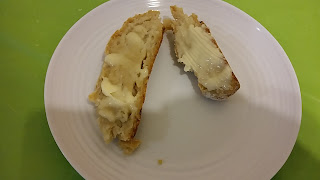 I have to admit, this didn't turn out as I had expected. And I think that has to do with the fact I used a canned potato instead of a bakers potato. The canned potatoes were mushier to begin with. If you are going to use a canned potato, then you should cut the water called for in half.

That's about all I have for you this time around, don't forget to join in next month when we are covering the Star Wars franchise and it's being hosted by Simply Inspired Meals.

Posted by Domestic and Damned at 8:33 AM