This is the first round of book/movie club for this year. This year, instead of being just vampires, I wanted to bring in the themes of witches and zombies as well. Why? Because, as I pointed out last year with a few of the selections (Dark Crystal, Hocus Pocus, Omega Man) they can be one and the same.

So I thought it was fitting to start the year off with a story that manages to walk that tightrope. Practical Magic. (book by Alice Hoffman was released in 1995 and the movie starring Sandra Bullock and Nicole Kidman in 1998) I've actually talked about the movie a few times over the years on here, and was even inspired to make pancakes with apple syrup back a few years ago, for Food n' Flix as part of a big "potluck".

book:  Sally and Gillian have spent their whole lives trying to be like everyone else. Only, they're not. They come from a family of strong women who just happen to be able to cause things to happen. Gillian, the younger of the two sisters, ran away from home when she was a teenager, was married 3 times, and lived everywhere across the lower United States. Her mistakes were as wide open as the places she lived. Sally, the older of the two, has been the adult in every way since she was just a kid. Both witnessed how passion can cause you to loose your morals along with your heart; at very young ages as they watched everyone in their town it would seem, come to their Aunts for spells. Both women end up reacting to the knowledge in different ways. Sally, ends up a young widow with two young daughters of her own. Her heartbreak causes her to move as far from their hometown and the Aunts as possible. Sally has just begun to really get her life back on track, when Gilly shows up one night with her dead boyfriend in the backseat of the car. The two women have no choice but to bury the body in the backyard.
Jimmy's body, fertilizes the yard so quickly, it causes lilacs to grow out of season and practically over night, drawing to Sally's house, all the women in the neighbourhood. Each seems to find themselves saddened by the memories of their own lost loves, not knowing why. On one of these particularly hot summer nights, as Gilly is standing outside under them remembering the few good moments with Jimmy, Ben a teacher at the school where Sally works, sees her. Ben falls instantly in love with Gilly, and just like some of the women who used to visit the Aunts, Ben just won't give up on love.
Sally's daughters, both teenagers, find themselves falling hard as well. Antonia, the older of the two, falls in love with a boy at work, Scott. While Kylie, the younger and wilder, has to admit she's got feelings for her best friend Gideon.
But before the summer is completely over, the two women find themselves the main suspects when Detective Hallet comes looking for Jimmy in a multi murder investigation. A man who Sally now is unable to tear herself away from.
As the Owens women deal with their new set of relationships, they also have to deal with the "man in the yard", who even in death doesn't want to give up control, and continues to abuse them. 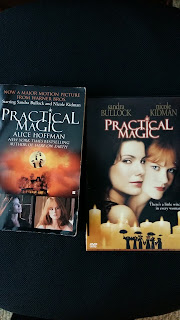 movie: The Owens women have been cursed in love for hundreds of years. It seems any man who falls in love with them dies young in a horrible accident. This combined with the fact the whole family are witches, causes the latest generation -Sally and Gilly- to be outcasts in their town. Gilly, always the party girl, runs away as a teenager cris-crossing from place to place breaking hearts along the way. That is until she meets Jimmy Anglelov; an abusive drunk. Sally on the other hand, falls in love with the guy working at the grocery store. Soon, Sally's life is peaceful as she's finally accepted by the locals now that she's married. But her happiness is short lived. A few years into the marriage, Sally's husband is killed in an accident, leaving her and their two young daughters with no choice but to move back in with Sally's aunts.  Sally's aunts are known to be able to cast love spells, which Sally learns they did for her to years before to help her get married. After dealing with her grief, Sally opens a small store with her two best friends.
Meanwhile, things have gotten worse for Gilly, who's had to resort to slipping belladonna into Jimmy's drinks to keep him sedated. When she finally has the courage to ask for help, Gilly calls Sally to come pick her up. But Jimmy tries to kidnap them both, and in self defense, they poison him. Now, after both women have spent their lives denying their magickal heritage, they try one of the most complicated spells to bring Jimmy back to life. Now a zombie, Jimmy is even worse; resorting in Sally killing him for a second time and having to be buried in the backyard.  The rose bush that was planted over him begins to grow wildly overnight, taking over the entire yard. Before they know it, a police officer shows up on their doorstep looking for the missing Jimmy. Gilly tries unsuccessfully to cast a spell on the officer, terrified of being sent to jail. This causes both Sally to confess everything, and Jimmy's ghost to start possessing Gilly.
Sally, her daughters, the aunts and most of the women in the neighbourhood then band together to help release Gilly from the death grip Jimmy is still holding on with.


The differences between the movie and the book are enough to notice, but not enough to call them different stories. Such as in the movie, Sally and her daughters move back into the Aunt's house after the death of her husband; where in the book this is the point in the story where they leave the Aunt's house.  The character of Jimmy is already dead in the novel when Gilly shows up, but in the movie, he dies after Sally rescues Gilly from him. The two daughters, Antonia and Kylie, are reversed in age and appearance from book to movie. Detective Hallet has a major role in the movie, but does not appear in the book until the last 50 pages; as the Jimmy storyline is not as up front. The characters of Scott, Ben and Gideon are left out of the movie all together. Sally owns a store in the movie, but in the novel she's a secretary at a school. The Aunts have even less effect on the novel's plot then they do in the movie, as we see them in the very beginning and end only. And there is no actual possession in the novel as there is in the movie.

The themes in the movie are sisterhood, love, abuse, trust, honesty, faith, believing in yourself and duality. Everything seems to be done in twos here. From the sisters - the Aunts Jet and Francis, Sally and Gilly, Antonia and Kylie- to the men, to the best best friends. (Gilly starts off with her first teenaged boyfriend and ends with Jimmy. Both men are less then intelligent. Sally starts off with her husband Michael and ends with the detective Hallet. Both of whom are overly sensitive.) Sally has two female friends who are Wiccans, and there are two of the school moms featured repeatedly that become part of the coven.
Just as Gilly/Sally are duel sides of a coin, so are Jimmy/Hallet. Each representing the best and worst characteristics of what men are capable of. Each in their own way, devoted to their ideals. And both happen to be "cowboys". Which has to be the ultimate symbol of male movie icons just as a witch is the ultimate symbol of female movie icons. We also have two dead "sister witches" in the form of Maria Owens in the 1660's and the mother of Sally/Gilly from the 1960's.

The themes in the book are sisterhood, trust, abuse, grief, death, control, self awareness, be careful what you wish for, sadness/depression. There is this sense of everything balancing itself out but not in the same way the movie ends up doing. There really isn't the same level of duality in the original novel, but more of a coming full circle. As shown with the drugstore girl who begs and begs repeatedly for the aunts to help her make the man she loves love her back. Only, when it becomes too much for her, she becomes trapped in her own bitterness. Later, at the end of the novel we hear she finally "gets free of him" when the husband dies and she leaves town. While trying to control the man of her desires, she ends up being controlled by him, which is her own fault.

And what did everyone learn last year in book/movie club about vampires...don't always look for a blood sucking fiend. Be aware that real vampires drain your life. They take from you what makes you you. Be it your blood, or energy, or spirit, or self respect.
Add to that, the modern popculture zombies are all branched off from the vampire genre and how in folklore vampires/witches/ghosts were considered the same thing...well see where I was going with this month's selection.   So, the story has two "vampires" in a lot of ways. Jimmy and Drugstore Girl. (who we see in the beginning and end of the movie too) Jimmy's abuse and addictive behavouir in life, his ability to call to the women in the neighbourhood like a male siren, controlling everyone with fear and setting them into petty fights (in the novel)  and his ghostly possession (in the movie).  Drugstore Girl doesn't care about anyone else's feelings but her own, demanding over and over from the aunts assuming they and those around her owe her something, taking not only the freewill of her lover but destroying his marriage to his first wife as well. 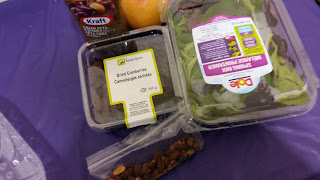 I decided to make something this time around. In the book, the characters of Sally and her two daughters are vegetarians, one of the movie's most noted scenes is when Sally looks up at the sky and comments on the red light around the moon, and everything important seems to happen in the garden in both movie/book. So, taking these elements, I decided to make a "blood on the moon salad". 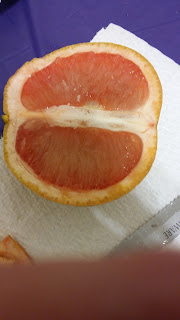 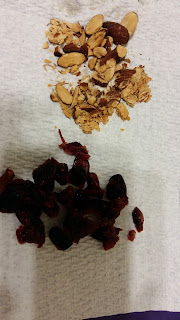 I had wanted to do a blood orange, but couldn't find any so that's why I went with the red grapefruit. Which looked a lot deeper in real life, not as deeply red on camera sadly.

The almonds, I just used a rolling pin to crush them a little.

The combo of sweet cranberries with the salty of the feta worked amazingly well with the smokiness of the almonds. This is a combo, I would dare to even add in a dessert. The whole time, I couldn't stop thinking that it would have been perfect in a cheesecake.

Nothing overly fancy, but yay, food inspired by the combo this month. 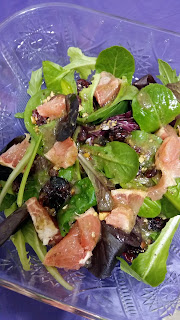 If you would like to take part in any upcoming Night Bleeds book/movie combos, the next one is in April. We'll be covering The Vampire Lestat (book) and Queen of the Damned (movie)  But I'll post an official note about it next month.

Posted by Domestic and Damned at 12:07 AM