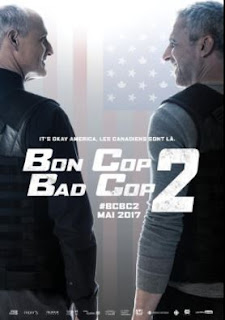 plot: Two Canadian detectives, David who is undercover, and Martin who is now a federal agent, find themselves reunited after ten years since they last worked together to solve a murder investigation. This time around, they are caught up in a terrorist plot that at first seemed like nothing but a simple car theft.

I talked back few years ago about how much I loved the first of the films. So of course, I had to rush out to see this one in cinemas. First off, let me just say thank god for subtitles, because 95% of this was French and I don't speak a lick of French.  And I'm actually amazed it landed in my local cinema, because we never get subtitled films unless it's a film fest. So this was very cool simply for the fact it was a non-English film being shown in my local cinema.

The first film was a buddy cop comedy that didn't take itself overly serious. This however, is a buddy cop drama-comedy that does take itself more serious.  For me, the biggest laugh came which the joke of the theft of the hockey helmet, and what to do with it afterwards.
The plot starts off soft, with what looks like just a mob boss running a car theft business. But, it soon turns out the cars are being used as mobile bombs and being sent over the boarder to the states.  This movie pretty much says the states are/is destroying itself at rapid speed.

And the mob boss isn't even "the big bad" in this. The first half of the movie is centered around the undercover investigation, framing the mob boss as the bad guy; but we quickly learn he's just a pawn in a much more devious plan.

Since it just came out in cinemas this weekend, I won't say too much else because of spoilers, but I will say, that the ending leaves plenty of room for a third film. Even though one character is dealt a "shaky hand", his storyline can easily be reopened. There is also a hint of the possibility if they make a part three; there being a female cop brought in. And I really really really hope there is a third part to the series.

Posted by Domestic and Damned at 12:27 PM