Spudguns!  once again, I'm back to let you know it's dinner time! And this month's Food n Flix selection is  Wreck It Ralph,  which is being hosted by Amy at Amy's Cooking Adventures. 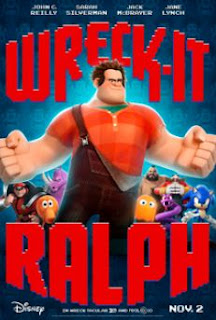 plot: In the land of video games, Ralph is one of the bad guys, only, he's tired and stressed out from having the job of being the villain. After talking to some of the other villains, he decides to change his program. On the anniversary of his game, he sees the rest of his team mates having a party and makes a deal with them. If he can earn a metal, they'll treat him better in the hours after work. Ralph then begins his quest to earn that metal, which he manages to do when sneaking into one of the other games. Meanwhile, he's unaware just how his absence from his game is affecting the rest of his team mates; as it's left his game unplayable. With their game now under threat of being unplugged forever, Fix-it-Felix leaves the game as well in search of Ralph. Before long, both find themselves in a racing game called Sugar Rush. They along with one of the racers have to save Sugar Rush from the hands of the biggest villain in the arcade.

I'm surprised to say, I actually dug this movie. I didn't think I would by the trailer, but it was interesting and had a few moments of laugh out loudness.  It reminded me of not just the video games of the 80's that it referenced; but of those 80's adventure movies (Goonies, Princess Bride, Neverending Story, The Wizard)   I think casting John C. Reilly (Vampire's Assistant) set the mood perfectly; as he has a very expressive voice.

I was unhappy with the fact this movie is 99% desserts. It sort of stumped me for a few days as to what to make.  I did however, keep thinking about one scene. When Ralph is first out of his game trying to find a metal, he checks the lost and found box at the root beer bar, and finds himself  one single mushroom from Super Mario. So I knew I wanted to do something with mushrooms. Add to this the fact the character of Vanellope builds her first race car from found items. I decided to make  "lost and found alphabet soup." 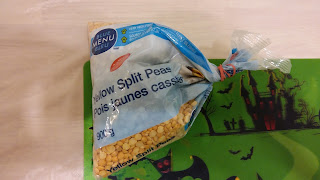 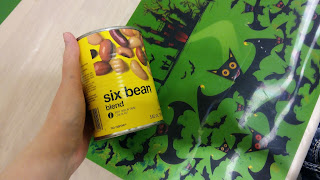 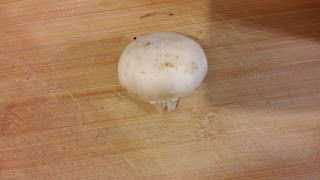 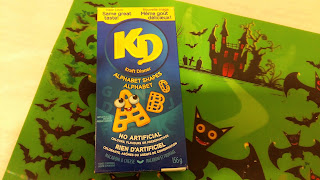 I used the pasta from a box of shaped KD, and only one single mushroom to fit with the joke in the movie.  These would be my "found items"

As well, the pasta shapes reminded me of when you put your name in the winner's section of arcade games, they sort of look like the block style most games used to use. 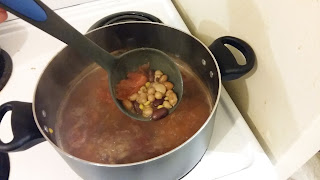 I started with the split peas, as they had to cook for nearly 45 minutes, then drained the beans adding them, cooking for another 30 minutes before adding the rest of the ingredients; saving the pasta for the very last as they only needed a couple of minutes to soften.


That's about all I've got for you this time around, join us again for another dinner and movie idea. Next month's selection is Guess Who's Coming To Dinner, and is being hosted by CulturEatz. 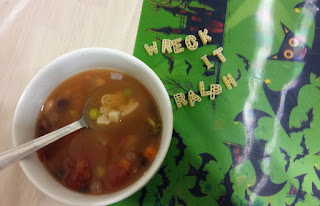 Posted by Domestic and Damned at 8:18 PM