plot: Being told he is the only one left of his kind, Jen is given a quest to make the great crystal whole again. He is given the missing piece of the crystal, and instructed to save the worlds in which the crystal controls. Along the way, he meets Kira; who has also been told she is the last of her kind. The two, Gelflings, then find themselves on a journey against time, as each member of the races of both the Mystics and the Skeksis are dying. The Skeksis who currently own the crystal, are unwilling to see it repaired, as it would mean they will die out completely. They have for the last few hundred years been able to cheat death by draining and drinking the lifeforce of other creatures.

I like the little addition of the "drained creatures" becoming zombies and aging rapidly once they have been juiced for their life energy. Shows once again the direct link between the vampire genre and the zombie genre.  They become the slaves to the Skeksis, in a way very similar to Renfield in Dracula. Completely under the spell of the ones who drained them.
I've always said this isn't a kids movie. From the vampires to the witch to the young lovers, this really is something heavier, something darker than a kid's movie.  The fact too that the creatures look like vultures (animals that represent death/rebirth/new way to view things)  and sloths (the need of a different perspective/the way will be slow but you will reach your destination/psychic insight) adds an undertone that makes you think if these were picked for those reasons? I like the touch of the idea that the Skeksis have to sit in the "light of the sun as it is prismed through the dark piece of the crystal" hinting at it as if it were moonlight. (another toss back to vampiric folklore)

You also have this coming of age story. The character of Jen is sent out into the world alone, to deal with very adult issues when his "parent" dies. He discovers girls and violence, and revenge.  The "grandmother" figure of Aughra, is a psychic/hoodoo/hedge witch; who puts him on the right path in his "crossroads".
There is also the fact that the female Kira, is drained almost to the point of death, then does die having sacrificed herself, only to be brought back to life once the crystal has restored everyone else. You could look at it as her being "turned" by the vampiric energy. It's the sacrifice that makes the point that to enjoy life, you have to know when to let go. (birth/death/rebirth)

what do I think I learned? I'm an adult and I still get creeped out by the one character's "hhmmmmm". Will haunt my nightmares for a few days trust me. 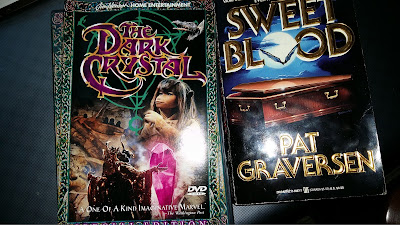 Okay, so this month, I decided to do something bit different, I gave you the movie, which was Dark Crystal, and told you to pair it up with a vampire book, expressing the combo of it. Think of it as a mid-term test. I want to see how good you my lovely Spudguns! have gotten with finding the vampires in things.

My personal choice for the book half of the combo is ...Sweet Blood by Pat Graversen (1992).

plot: Adragon and his mother Elsbeth are never seen apart. They look alike, act alike and have spent almost every moment of his seventeen years together. That is until the night Elsbeth gets invited to the Society of Vampires. They want her to write a novel about them, and their secrets. Adragon accompanies her to the strange private party, where he meets Del. A twenty-six year old woman who he quickly falls for. Against his mother's wishes, he begins an affair with Del. After their first night together, she informs him that what he saw at the party was real, and that she is a vampire. Refusing to believe her, Adragon begins to fall deeper under her spell, choosing his new lover over his mother. Before long, Del lets him feed off of her own blood, awakening the vampire side of him. Adragon discovers that for one to become a vampire, one has to have already been one in a past life or at the very lest, one parent must currently be one. To his horror, he finds out both to be his fate. He learns his mother Elsbeth is in fact a vampire, and that they have both lived many lifetimes as such. When he confronts Elsbeth, she confirms this; letting him know they are one in the same. They share a soul, and have been punished in this reincarnation to be only parent and child, and not lovers. This truth begins a downward spiral for Adragon, as he begins to deal with his new life and new choice of who to trust, and who to love.


My "combo connection" was the idea of soulmates and duality and how one can't exist without the other. As we see in the movie, how the creatures of the Skeksis and the Mystics are each soulmated to each other, unable to move on to the next incarnation without the other (originally one being who was split when the crystal cracked), and how the Gelflings can share psychic/telepathic connections. And of course, the taking of "life essence" (souls in the movie via liquified sweat like, and blood in the book) in traditional vampire fashion.

I found it a little ironic that one of the sub-themes in this novel, is that of the "vampire pretending to be human pretending to be vampire -author" which became a strange sub-genre in the 1990s in vampire fiction.

Not only does this novel jump into the idea of what a real soulmate is, it's main theme is addiction. We have the character of Adragon, who becomes addicted to the vampire blood of his lover, Del. He's seventeen, with the temperament of someone who is used to getting their own way. Though the character doesn't start off that way, it only shows itself after he starts the affair. He's also, in his own innocence, experiencing the emotions of that first real love. The two elements begin to counteract each other, making the character a violent greedy one. (much like the character of Chamberlain in the Dark Crystal) He becomes possessive of her, but at the same time disgusted with the situation. He flounders back and forth between wanting to be with his girlfriend Del, and wanting to be with his mother. And then he begins fighting the instinctual desire to be with his soulmate on a sexual level. This brings up a whole new set of insecurities within the character and becomes a new undertone to the story. (I've said it before you can't escape the theme of incest within the vampire or werewolf genres. Whether it's on purpose or not it's always there.)

Just like in the movie, we have the character of the "girlfriend" being the teacher to the young male hero. Who's real history has been kept from him.

In another ironic twist, both the movie selection and book I picked this month, has a "society lead by an ancient vampire".  In the case of the book, we have the character of Raymond, who has lived in the same "body" without dying for centuries. He's reluctant to let go of his physical life to restart the next phase, because he is alone; without a soulmate of his own. It's only when a willing sacrifice by one of the main characters is offered, does he accept his fate.

I think that is the big theme here that you can say truly runs through both stories. Knowing when you have to give up the thing you are clinging to most, and face the big fear.

And I will stop there for today. October's selections are Salem's Lot (book) and Fright Night (1985) but I will be back later in the week with the official post for it.

Posted by Domestic and Damned at 9:00 AM