I'm was sitting here digging through one of my boxes of vampire movies, when I realized, something.  There is a sub-genre in the sub-genre that is subtitled vampire films.

Night Watch and it's sequel, Day Watch, are two Russian supernatural films, based on the novels by Sergei Lukyanenko.
(I have the English versions in my never ending to read pile of books 1,2,3 and 4 in the series. And just heard there is a book 5 )

Let the Right One In,   is also based on the Swedish  novel, by John Ajvide Lindqvist (this is on my to buy list)  But if you don't want to sit through the subtitles on this you can rent the English remake  Let Me In  (this is one time when I actually liked both the original and the American remake of something)

Love Bites,  is a French film from 2001. (not to be confused with a million other movies by the same title) that stars Asia Argento and has a small cameo by Vincent Perez (Queen of the Damned, Crow 2 City of Angels)

Okay, I had a bit of a cheat with Nosferatu,  but it's on the list because it does technically have subtitles and it's a German film.


Bonus movie- Karmina 2 Les Zombies.   This is not officially on the list because it's a Canadian film. But I wanted to mention it because it's just such a unique movie.  (okay I suppose if you are reading this list outside of Canada or even American, this would be a foreign film) 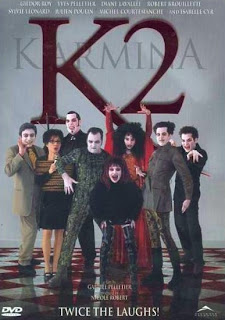