Heather, who runs All Roads Lead to the Kitchen (formally; Girlichef) has once again allowed me to crash her Friday Pie Day.  And this month's Friday Pie Day, as last month's did,  happened to fall during my theme week, which means for me that I had to connect the recipe someway to this week's theme.  Which is Frankenstein.

I chose to make a savory pie. A version of a pot pie actually. Vegetarian at that.

And you're wondering how do I get a vegetarian pot pie to match up with Frankenstein?  Well, for one, I used leftovers.  I'll let that sink in for a moment. You good? Spiffy. And second, in the 1994 version of Mary Shelley's Frankenstein, there is a scene where the creature is farming potatoes and other root veggies.  So I went with a potato and leek pie.

While checking out recipes for pot pies, I saw a bit of a discrepancy over what makes a pot pie officially a pot pie. Some have both a bottom crust and top, some only have a top crust, and some are simply a stew with drop biscuits as a crust.  Since this is technically a "mock" pot pie, because there is no meat in it at all, I saw no harm in compromise on the crust. I did a top and bottom crust made from a tea biscuit recipe, the bottom being flat and the top being a drop biscuit. 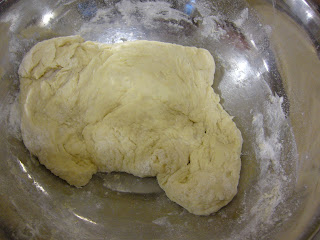 mix and separate dough, spreading half into the pie pan. 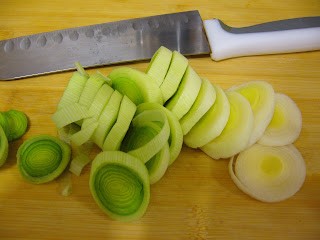 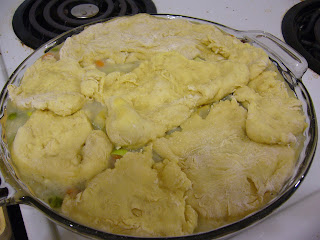 in a pot, boil the hashbrowns, peas and carrots for 10 minutes, stirring occasionally
remove from heat, let cool for a few minutes, then add flour, stirring once again.
return to heat, add milk and let simmer for another 5 minutes,
add marjoram, sage, salt, pepper, and rosemary to taste, continue to stir for another few minutes,
remove from heat and let cool to thicken.
add leeks, stirring once again 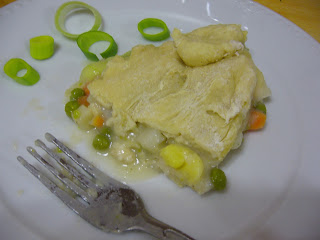 pour filling over bottom crust, then with the remaining dough break up into smaller pieces dropping them on top as evenly as possible.

Bake at 350degrees depending on your oven for 12-15 minutes.

I have to admit, I liked the way the drop biscuit top looked given it was meant to connect to Frankenstein. The patchiness of it to me was more then fitting.
Posted by Domestic and Damned at 7:05 AM