plot:When a teenaged girl makes a wish out of anger, she discovers her baby brother has been kidnapped by the King of the Goblins just like in her favourite fairy tale, and only has one night to get him back.

There are so many elements in this that remind me of Alice in Wonderland, from the double headed card guards, to the needing to stay on the good side of the king, to the fact you're never completely sure who can be trusted. (think the Cheshire Cat)  As well as Little Red Ridding Hood. The idea that innocence is fleeting and not every promise is one of good intentions.

Honestly, I've never totally seen this as a kid's movie. There is that hint of forbidden relationship between Sarah and the King Jareth. Specially the notes of jealousy when Jareth sees her interacting with Hoggle, and tosses them both into the bog of eternal stench. And has anyone else noticed there are more than a few shots of him only from the waist down...just saying. And can we talk about the dream sequence for a second. It has such a Dionysus vibe to it. The whole masked ball never felt "safe or innocent" to me. It always had a sexually charged vibe and a down right creepy vibe too. As if you expect someone to either get raped in the middle of things or an axe to the neck. There is just something sinister about it. (her hair in that ballroom scene always put me in mind of Bride of Frankenstein, with the up do and silver/white barrettes)

Like any sword and sorcery movie, you've got the brave knight going on a quest to save the princess...er okay in this case the prince, as our "knight" is the Connelly character of Sarah and the "damsel in distress" is the baby brother. Here you've got a girl who makes a faustian deal and because she never thought it through, regrets it. She's then sent on this trail of redemption, all the while hitting these pitfalls, which challenge her character. Both morally and physically(intellectually/emotionally/spiritually)
In the end, she sheds her childhood taking responsibility for things, which is seen in the metaphor of her passing the teddy bear on to her brother, the object of her disdain to begin with.

what did I learn? Life can be easy but not always fair

What that Movie Inspired Me to Do...Guess what? It's 80's day! At lest on my blog. On my blog and my friend Heather's blog.(All Roads Lead To The Kitchen)  We were chatting about our favourite movies from the 1980's when we were both a million years younger, and got it in our heads to do another one of these just the two of us. (You might remember we both did our takes on the Cher movie Mermaids back few months ago) The big twist this time is; neither of us has yet to tell the other what movie from the 80's we took our inspiration from.

I took my inspiration from the forest dance scene, where the Fireys are singing "Chilly Down" and made chili.  Yep, the crazy little red fuzzy dudes are called Fireys; which I didn't know until I re-watched it earlier and actually watched the credits. All these years I thought they were called Foggies. I seriously thought the lyrics said "chilly down chilly down with the Foggies" but it seems I've been wrong. 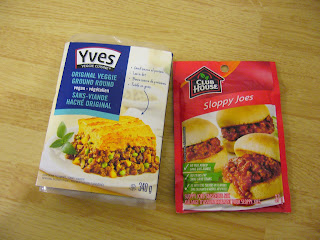 The baseline of my chili was sloppy joes, made with veggie soy-meat, sloppy joe mix, tomato paste and water.

So basically, follow the directions on the sloppy joe package. 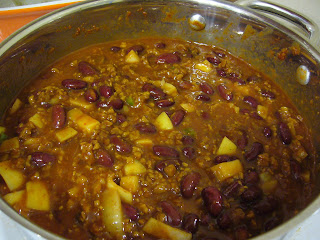 That only took about two minutes, from there I added half a chopped onion, some chopped green peppers, some chopped mushrooms, one can of red kidney beans, salt, ground black pepper, minced garlic, half cup of pasta uncooked, some crushed red pepper flakes, and about a half cup of cheesed diced.

I let that all simmer together for about twenty minutes, just long enough for the beans to soften and the pasta to cook.


I have to say, I haven't watched this in years, so re-watching it had me singing along, laughing and just as giddy at my age as it did 30 years ago when I was 12. David Bowie was one of my favourite singers and actors, and I always thought he had such a mysterious quality to him.
The character of the Goblin King, looks like a cross between a member of Motley Crue and a vampire. There is just this seductive witchiness to him, that you don't see too often in films anymore. 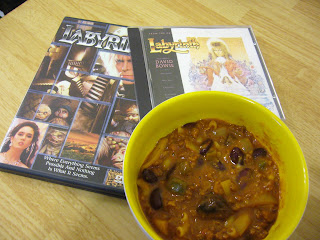 Now, I'm off to see what movie inspired Heather on her blog...

Posted by Domestic and Damned at 7:30 AM