plot: A team of  professional vampire hunters find themselves up against not just a master vampire, but the first vampire. Now, they have to keep him from becoming the most powerful thing on the planet.

Based on the book Vampire$ by John Steakley

This is one of the best adaptions of a book I've ever seen, in any genre. Not the most faithful, let me get that straight, but one of the best. It took the core of the characters and built a great world around them. Like a lot of movie versions of books, this one omits some characters, adds a few new ones and combines others.
The movie kicks off with a great action scene where the slayers are knee deep in a hunt. This particular scene is a few chapters into the book, but it sets the tone for the entire film.

The character of Katrina (Davette in the book), played by Sheryl Lee, in the movie version is a prostitute when she's bitten, (the book she's forced into prostituting herself after she's bitten) and becomes the bait/beacon throughout. This is used to trap the vampire Valek (Ross in the book). She then in a moment of bloodlust, bites Montoya (a combination of the characters Carl and Felix from the book) They begin a relationship, which the character of Montoya sites as being in love, but is actually a sire bond. But given Katrina does not have the same level of bond with Valek, we would have to assume there is a mutual attraction between Katrina and Montoya to begin with before she bit him.

We learn one of the high ranking members of the Vatican is a traitor, promising to help Valek with the ritual, in order to become immortal himself. This is how Valek finds out about Crow in the opening scenes where he slaughters the other members of the team.  And that is pretty much the base line for the theme in this version of the story. Who can you trust? You are left asking where does everyone's loyalties lie as you watch them arrive at the abandoned town just before sunset. Montoya has just begun to show his sire bond to the girl, and the riff between himself and Crow has started.

The use of a western for the vampire genre is by far my favourite. I love that this story is unapologetic. Both the movie and the book, the movie more so.  There is a small inside joke near the beginning of the film, where the character of Valek's climbing out of the ground and it fades into the next shot which is a sign for the hotel "Sungod Motel", as Valek is one ritual away from being able to walk in the daylight without dying.

There is an official sequel Vampires Los Muertos, which was produced by John Carpenter.  The movie Vampires The Turning, is not an "official" sequel, but it does have elements that can be considered connecting it to the other two.

what did I learn? Crossbows never go out of style 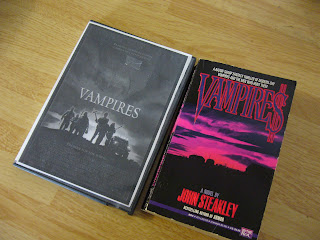 Vampire$ -Jack Crow is the leader of a group of professional vampire hunters, who are being backed by the Vatican. For the last few years, the team members have survived some pretty dangerous rounds of vampire hunting, loosing the odd few on each mission. This time, they find themselves facing a vampire who happens to know about them. This vampire, Ross, is stronger than any they've come across and manages to wipe out the entire team except for Jack and his two closest members, Cat and Carl. When the remaining members of the team regroup with their boss, and two new members, Father Adam and Felix; they find a young reporter, Davette on their doorstep. Taking her in, they discover she's been originally sent to distract them long enough for Ross to finish the job, only Davette has by this point become like family to them.

I first read this book when it came out, over 25 years ago when I was in high school. It's been on my list of top five vampire novels ever since, and one that I constantly tell people they should pick up if they want to read anything in the vampire genre.  There are hints of the "classics" running through it's veins, as the main vampire Ross has this impressive control over the character of Davette, her aunt and her best friend Kitty. (think how Dracula has control over Renfield, as well as the three brides, on top of the way he uses Lucy to get to Mina) The relationship between Davette and Kitty can then be compared to not only Lucy and Mina's in Dracula, but also between Laura and Carmilla (Carmilla by Sheridan Le Fanu) or even between Lord Ruthven and Aubrey (The Vampyre by John Polidori)

Half the story is suppose to be happening as you read it, and half is told through flashbacks. We meet the character of Felix first through one of Crow's flashbacks, and learn that Crow's never seen anyone shoot a gun the way Felix can. He in turn becomes their gunman, and is given a few hundred rounds of silver bullets designed just for him, as he likes to use only one specific gun. There is actually a scene in the book, where the vampire Ross crushes this gun, which sort of alters the way Felix then interacts with the rest of the team. Felix and Davette when  they first meet, are both trying to deny they are attracted to each other, each unsure if they are going to stay with the team for their own reasons. As the story progresses, we learn they both grew up in the same wealthy neighbourhood a few years apart.

In the book, garlic doesn't work, stakes are used, but one of the elements I really love is that they bring in the silver bullets. This was one of the few stories I remember reading when I was younger that actually drew from the folklore that silver affects vampires. The main default kill is sunlight though. The book has the hunters dressed from head to toe in chain mail suits, with large electric crosses on the fronts. They are represented as modern day Knights Templar. The movie version drops this, but has the vampires referring to them as "crusaders".

What I got out of the book on this re-read, are themes of shame, humiliation, insecurity, greed and fear. The character of Jack Crow puts on this tough exterior for his crew, but he's constantly monologuing  in his own mind about how scared he is, and belittling himself. The character of Felix does this as well, only not as vibrantly. Neither of them want the position of group leader, but both feel obligated to take on the role.  The whole subplot between Ross/Davette/Kitty, stems from them having grown up together, and the girls treating Ross badly. So what starts off as some typical teenaged behavouir, becomes the catalyst to his torturing them after he becomes a vampire.  I find it interesting, that we never learn about Ross's past other than Davette mentioning that they thought he was a jerk when they were younger. We never learn how or why he becomes a vampire, or why he's been put in a sort of position of power by the vampire who sired him?
It's kind of interesting that Ross never really has his own identity. He dresses the way he believes a vampire should dress, in something that looks like it would have been worn in the 1600's, even though he himself is only suppose to be in his late teens having been turned some time around 1986. This lack of identity is mirrored in Davette's situation, being under his control, and with the whole team as they are merely doing what the Vatican is telling them. There is also this extreme loneliness mirrored between Ross and Crow. Both unable to completely be with the woman they are in love with. Ross is in love with Davette for all the grief she put him through, and Crow is in love with his team member Annabelle, but refuses to allow himself to be with her while they are still hunters.

And for once I got my homework done early enough to craft/bake/cook something. I wanted to incorporate the words "rock n roll" somehow in the recipe, because in the novel Crow constantly says rock n roll, and the team learn that vampires hate rock music. But, I ended up not being that clever. Instead, I went pretty basic, doing a tofu "steak".  I did however, grab onto the idea of cherries, because the novel has all the characters calling Cat "Cherry Cat", which is never actually explained as to why.  So, I made dry rub for the tofu, and a salad with cherry tomatoes and homemade garlic croutons. 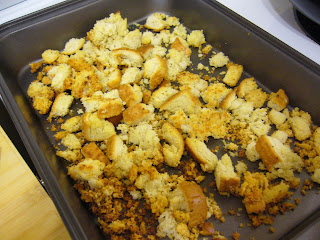 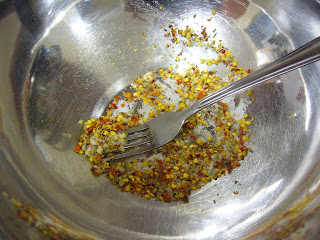 The croutons were simple, I pinched up a few slices of white bread, and mixed them with some minced garlic, salt, parsley and olive oil. Then just popped them into the oven for 20 minutes at 275degrees.

After removing the majority of the liquid from the tofu with a paper towel, I rolled it in the dry rub, then cooked it on medium-low heat for almost 45 minutes, rotating it in the pan.

When it was done, I deglazed the pan with a bit of pop. I used Dr. Pepper, because that was the only flavour of pop I could find here that even came close to having a "cherry" taste.  I used this as a sauce for the "steak". 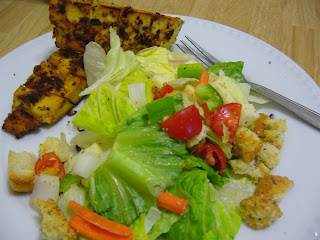 
I would have loved to have done a BBQ or sundried something like jerky to tie into the whole sunlight burns them element, but being vegetarian I wasn't too sure how to go about it.

I'll be doing a round up for this month's selections later in the week.  So if you've read the book or watched the movie this month and have blogged about it, drop me a comment.  I do know that Heather over on All Roads Lead to the Kitchen joined in this month, so don't forget to check her offering out.

Next month we'll be talking about the 1992 movie Buffy the Vampire Slayer and the 2010 book Jane Slayre. But I'll be back later in the week with the official announcement post for that.
Posted by Domestic and Damned at 7:21 AM