SPOILER ALERT
plot: Canadian actor Jay Baruchel goes to L.A. to visit Seth Rogen, who is a Canadian actor living in Hollywood now. On his first night in L.A., they go to James Franco's house for a big housewarming party. Jay does not want to be there and manages to talk Seth into leaving with him. They stop at a corner store and while there, all hell breaks loose, literally. What at first seems like an earthquake and very possibly aliens abducting people, turns out to be the actual apocalypse. They have no choice but to return to Franco's home, and as they do, the mouth to hell opens up on his lawn. Half of Hollywood has been sucked in, and a few honest souls taken to heaven.  The handful of actors who are hiding in Franco's house, realize they were not good enough to make it to heaven. They soon run out of supplies, and have to find more. Meanwhile, demons are chasing them, possessing them and turning everyone against each other. In the end, it's a choice, sacrifice themselves and hope they make it to heaven or be eaten by demons.
END OF SPOILER 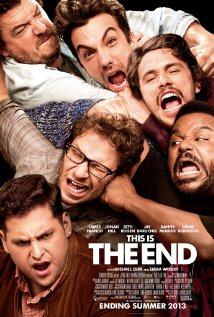 I laughed so much during this film.  Normally, I'm not one for raunchy films. This even with some of the subject matter manages to keep the raunchiness to a minimum and is a buddy movie at heart.  If you are wondering why I didn't use character names in the write up, it's because they use their real names in this film.
This has a taste of every post-apocalyptic movie, with just enough Exorcist thrown in for good measure, ever done. And somehow, it works.
Ironically, this is also so to speak, a remake of a previous movie that both Baruchel and Rogen did called "Jay and Seth Versus the Apocalypse"

Posted by Domestic and Damned at 7:29 PM