Anyone who knows me, or has been reading anything I've written in the last 20 years, knows that I'm a big fan of the Canadian rock/punk band  Headstones, and that Hugh Dillon is one of my heroes.

And since I just got my hands on the new Headstones cd "Love + Fury", I thought I would do a list of some of my favourite moments in movies that star rocker/actor Hugh Dillon.


5. Trailer Park Boys: The Big Dirty.   He plays the character of Sonny in this film. I have to say, there are two moments from this movie that I dig, his intro where he is playing pool and grooving to the old Platinum Blonde song, and the scene that is actually on the deleted extras, where he is yelling at the bouncers calling them "door monkeys".

4. Down to the Dirt.  He plays Renny, a drug dealer. He is silent for most of his scene, and it's about two minutes of screen time, but damn he steals it.

3. Ginger Snaps 3 Ginger Snaps Back aka Ginger Snaps Back the Beginning. He plays the Reverend in this film. And my favourite scene is his introduction, where the camera pans past the graveyard and there he is, standing among the headstones.  I thought that was such a brilliant tongue and cheek moment.

2. Twitch City. Okay, this is a tv show. But, I crack up whenever I see the scene where he is standing in line at the store waiting for Newbie to stop singing and dancing and check through his order.

1. Hard Core Logo. He plays the lead character Joe Dick, head of the punk band Hard Core Logo, and is beyond brilliant in this movie. It's difficult to pick one favourite scene, as this is one of my all time favourite movies. But, I'm going to go with the scene where the band is standing around arguing on the highway with the sun rising/setting behind them. It's just such an emotional scene, and he manages to pull off angry and disappointed and disgusted all within about two minutes. And it was a one shot.  Okay speaking of one shot... I have to add the big ending of the film. When he gets to the final scene, the character is deflated. There is just something in Dillon's eyes that expresses the whole journey of the character even more then his dialogue. Brilliant. 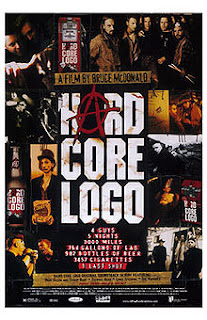 Posted by Domestic and Damned at 11:58 AM