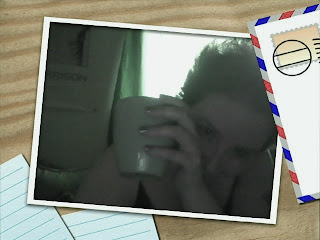 It's a weird day to say the lest.  Okay, I had done another one of my "what this movie inspired me to do" projects, and when I came in here to post about it, I noticed my blog was looking off.  The title was the wrong size, the type set was wrong... but, no matter how much I try to fix it, it's still off.  Okay, chalk it up to Friday the 13th.

I have been looking at all these websites for party planning for awhile now, and got it in my mind to do a vampire themed dinner.
I picked menu items from vampire movies, picked a basic colour scheme, and tried my hand at decorating.

It so did not turn out the way I had hoped. But when does anything I do work the way it should? I think the roof would cave in if something actually came out the way it was meant to with me.
I ended up having to cut almost everything out of the menu because they didn't fit together, and had two things plus dessert.  So in essence a three course meal. 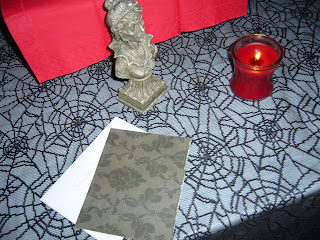 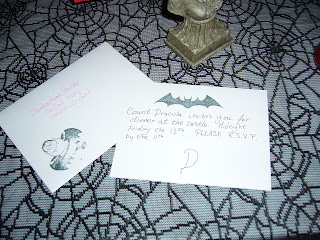 Step Two- the menu.   I have been seeing a bunch of vampire themed parties on other blogs, over the last three years. Most based on Twilight and True Blood.  I wanted something a bit more classic. Didn't really work out that way, but what I did do was sit down and write down any scenes in a handful of vampire movies that had food.  Like the rice in Lost Boys which I did a post on few months ago.  This is why I say I had to really cut back on some of the items on the menu list.(at some point I will do posts on the menu items that were not used today, and there were like ten that did not get used.)

Twilight... the big easy right?  In the movie there is the mushroom ravioli that Bella has on her first date with Edward, and of course the trademark apple.  Everyone and their dog's grandmother has done that since the movie came out in 2008.  But I noticed, that it's not the only vampire movie to go Italian for dinner.  I wanted to stay away from garlic bread, cause that's just too cliche.
In Vampire in Brooklyn, they have fusilli. (they talk about ordering it but you never see it)  In Innocent Blood, they order muscles in red wine sauce and garlic.  Lost Boys, has a scene with the family eating pasta, and Fright Night 2, has a gimmick to do with garlic pizza. So, with this in mind, I thought I would do a pasta mushroom dish.

In the movie Dracula from 1979 starring Frank Langella, there is one scene where they are eating soup. It's never announced what kind of soup, but it looks like a cream soup.  I chose a cream of asparagus. 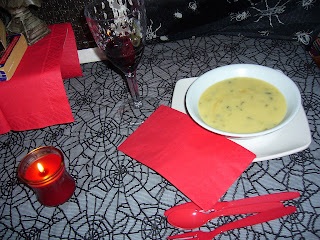 Linguine with sauteed mushrooms and garlic 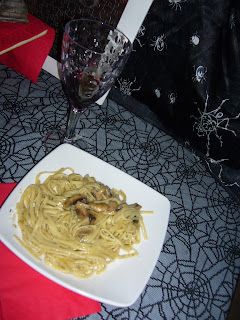 Step Three- the decor.  Well, I wanted a bit of a mix, but I wanted some traditional things happening here.  Again, it so did not turn out the way I had hoped.
But, I went with what was originally suppose to be just black and red. That ended up being too difficult to find enough of anything in this city in that colour scheme.  I ended up breaking down and using white/clear and grey as well.

You will notice the tablecloth is a spiderweb pattern, and the backdrop a spider pattern.  Again, something I had wanted to avoid.  But, I just could not find anything with bats, and my attempt to paint bats on a white cloth was a mess. The mini busts were something I had from a few years ago that I'd picked up at the craft store.  The large poster/puzzle of the Vampire Diaries, that's actually a half finished project.  More on that as time rolls on. 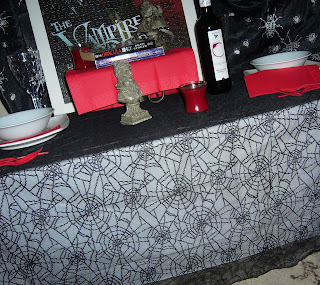 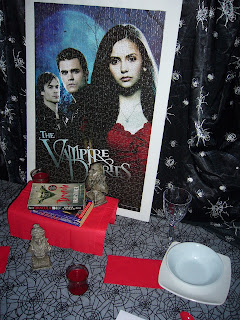 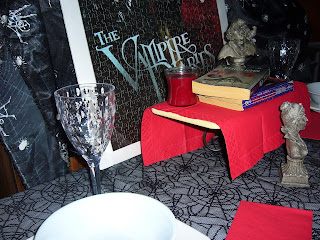 Step Four- the wine.   I know there is a large selection of Hallowe'en and vampire themed wines out there. Only, none of them are sold in my city, and many of them can't even be ordered in Canada. But, what I stumbled across at the liquor store, was a red wine called "Eclipse"  which, ironically fits in with the whole Twilight thing. That was a no brainer. 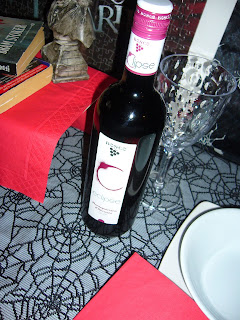 Step Five- desserts.   Right off, I'm not a baker.  My ability to make cookies and cakes are extremely limited.  But, I did attempt to make an apple pie via Twilight and Monster Squad (actually I think the character of the "scary German guy" serves cherry pie but...) and a stake through the heart cake.

Okay, not going to lie to you, they were total cheats.  I bought a pre-made pie crust and the cake was a boxed mix, and the "stake" was a roll of Pillsbury cinnamon rolls.

I attempted to decorate the top of the pie with a small bat shape, but it fell apart. 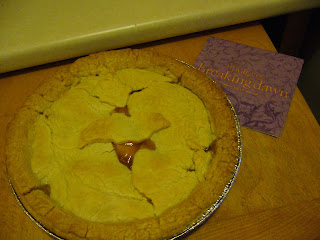 The red "blood splatter"  on the cake was a cake gel and the icing from the cinnamon rolls. Very tasty.  Okay, so the "stake" ended up looking more like a large knot then a stake but it worked, it was tasty and it stood up in the cake. The cake pan was something I found back at Valentines. So yes, it was a heart shaped cake pan. 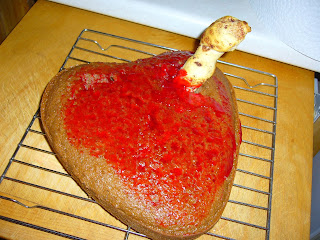 And ended with sugar cookies.  Those I did make from scratch.  Just a basic sugar cookie with sprinkles. Well, some managed to have sprinkles, the rest of the sprinkles went everywhere in the kitchen.  I'll be sweeping sprinkles up for days I know it. 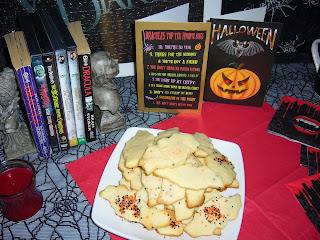 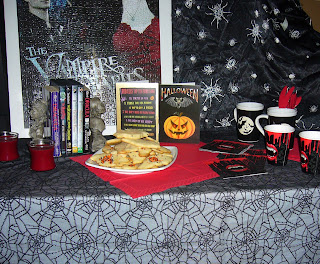 So that was my Friday the 13th/Vampire themed dinner.  Okay, so it wasn't pretty, it wasn't elegant like what you would see on the normal crafting websites or the party planners websites, but I had fun doing it.
It was a goal I set for myself and I think I reached it.

Posted by Domestic and Damned at 8:20 PM