What that movie inspired me to do #24

Okay, few weeks ago, I commented on the fact there wouldn't be a lot of posts before middle of October, and that I half way had something up my sleeve to post for this weekend. If things went even sort of half way as planned.

Well...they sort of almost went half way as planned. So, I'll post it anyways.

Remember back in 2013 (Friday the 13th Sept) I did a vampire themed dinner? Well, yeah we all remember how laughable that turned out to be. Anyways, I wanted to redeem myself for that, and keeping with the vampire food theme, had planned on doing a Brunch with the Vampire.  Only, a slather of things went wrong.
The food was much better, I admit my cooking has improved specially given the fact I actually cooked stuff this time instead of just heating up packaged things.  My decorating on the other hand leaves something to be desired, and there were a few technical issues with my camera dying midway.  I actually attempted to do this meal twice, on two different days. Finally, I threw my hands up in defeat and decided I was not going to try it again.

But...I had been inspired by two movies. Buffy the Vampire Slayer and the first Hotel Transylvania. It was Hotel Transylvania that really kick started this, and the memorable scene where they are all by the pool side having brunch before anyone realizes Jonathan isn't really Jonnystein but a human.  Omlettes are talked about more then once, as is garlic bread in the movie.
But, that seemed too easy just having that, so I started to think about some of the vampire movies that I didn't add last time, and Buffy was one.  Throughout the film, Buffy says the word "toast" or "toasty"; and there is one scene where she's being hunted by the basketball player and she mentions blueberry snapps. 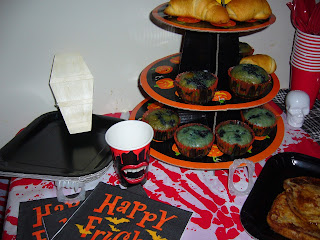 So, my Brunch with a Vampire contained garlic-buttery croissants and omlettes via Hotel Transylvania and french toast with blueberry sauce via Buffy the Vampire Slayer. (actually, the first attempt was french toast and blueberry muffins and the second was just the sauce) 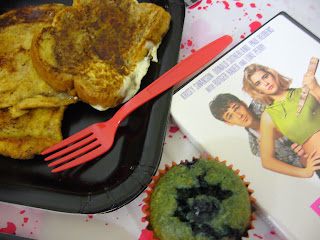 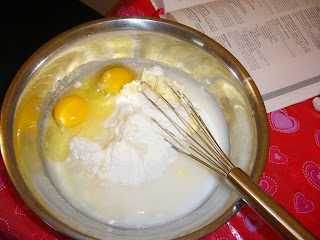 The muffins I made from scratch, got the recipe from The Joy of Cooking.  Yes, that is my main recipe book, I like to call it the grand grimoire. Seriously, I wonder why I ever bothered to buy any of the other 500 cookbooks I find myself tripping over, when all you really need is Joy.  Recipe is on page 635.

2 cups flour
1 tablespoon baking powder
1/2 teaspoon salt
2 large eggs,
1/2 cup milk
1/3 cup sugar
1/4 cup butter OR 1/2 cup vegetable oil
1/2 cup frozen blueberries.
The recipe called originally for 1 full cup of milk, but since the blueberries were frozen and a lot of liquid came out of them, I cut the milk in half.
Recipe also calls for the oven to be 400degrees and for you to bake 17 minutes. 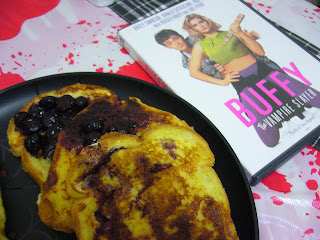 The second time around, when I decided to scrap the muffins and just go with the sauce, I just used what was left over from the September Food n Flix when I did the blueberry sauce.

As for the Hotel Transylvania offerings, I did cheat and used Pillsbury Crescent Rolls.  The garlic butter I made myself, which was simply 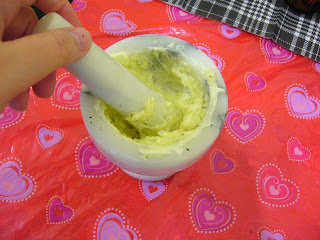 Mix together, spreading on the inside of the rolls, and then bake them to the directions on the package. 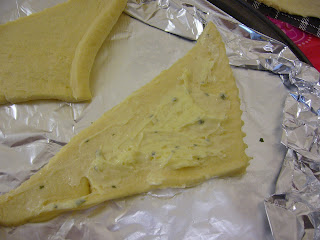 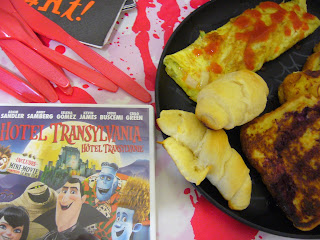 The omlette was a 2 egg omlette with cheese, and onion. (yes that's hot sauce...but pretend it's blood to go with the vampire theme)

And you can see the second time around, I ditched all the extra "decor" and went with just one special ingredient...Count Chocula! 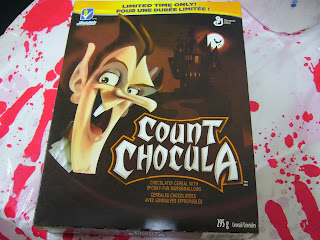 I was hoping to find a spiffy Hallowe'en themed bowl for it, but didn't.  Yes, this is a 2015 edition of the limited holiday release, and getting that box of cereal was an all day event. (2 stores, 4 and a half hours, 6 buses to find that damned box of cereal)

Did I redeem myself? Little. You know that some point down the line there will be another vampire food related meal. 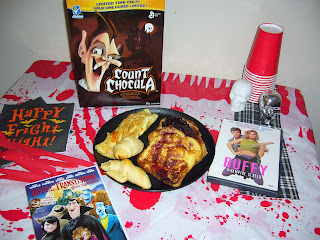 Posted by Domestic and Damned at 8:00 PM