It's that time of year again, when the crispness of the leaves melts in the air with the scent of pumpkin pie spice and hot apple cider. When horror movies go on sale at the store, and late night television has movie marathons of classic and not so classic films filled with vampires, witches, werewolves and zombies.  And of course, candy! Lots and lots of candy appears out of nowhere tempting us to devour it in preparation for the coming hibernation season many of us prefer... Yeah I already covered that on Day one , but I needed something to have as a lead in...

And nothing says hibernation during winter like a big bowl of goulash. So in the spirit of Hallowe'en, here's my version of a vegetarian goulash that even Grandma-ma Addams would be happy with. And so that's what I'm dubbing it. 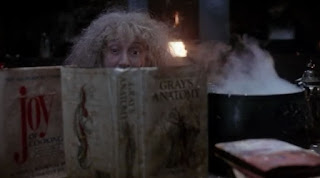 Did you dig my play on words there...ghoul-ash instead of goulash...you laughed admit it.

Okay, so let's dissect this shall we. There are literally hundreds of recipes for goulash, all claiming to be authentic. I claim no such thing. For starters, the word goulash comes from the word for herdsman -gulyas and the word gulyashus; which loosely translated  means cattle meat. And it depending on where you were, it's a soup not a stew. 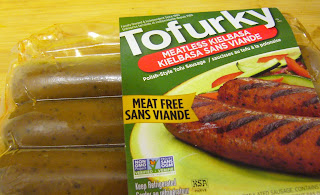 I wanted a stew cause it was raining out and I could think of nothing but thick gravy and fresh bread to slop it up with.

As you can see, I chose to use a veggie sausage for my meat replacement item. These are those rare moments when being a vegetarian sucks, trying to find decent ways to make a meat heavy dish into a vegetarian one. 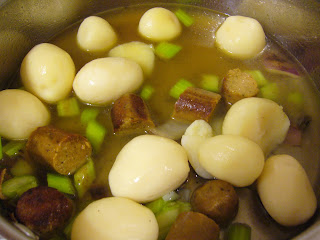 In the oil, heat the onion and the veggie sausage, then add the chopped celery
add potatoes and water to cover,
bring to a boil, then simmer for 10 minutes, stirring once and a while.
add paprika, pepper, marjoram, salt to taste,
stir and continue to simmer for another 10-15 minutes,
add splash of red wine, continue to simmer

Now, if you were to use beef/mutton you would find that it naturally thickens, as the marrow/gelatin would seep out and thicken it naturally; but given this is a vegetarian version, I had to use flour to thicken it.
And I added a dollop of sour cream for the hell of it. 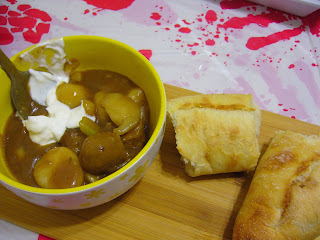 Posted by Domestic and Damned at 8:23 AM