My lovely Spudguns! it's Elvira week; and this is another of the recipes inspired by a scene from the 1988 movie Elvira Mistress of the Dark ... the picnic scene and the Tic Tac Pie. 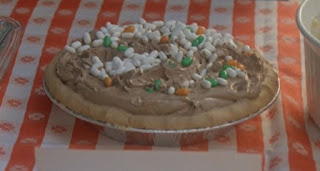 Okay, so here's the screen shot from the movie and their version of the pie.

I have to admit, that outside of this movie, I'd never heard of tic tac pie before.  I thought it was something thought up just for Elvira Mistress of the Dark. Which, it might have been? And we are talking almost 30 years ago!
Anyways, when I decided to do a recipe inspired by the infamous pie, I began looking around to see if there were any recipes for it.
What I found was raw pudding, heaps of marshmallows and tic tacs, I almost backed off.

If you've been reading me or talking to me at all over the last few years, you know that marshmallows are NOT vegan/vegetarian friendly. So none for me thanks.  (Ironically, tic tacs are considered vegetarian as they are mostly sugar and salt)

Then I started looking at other kinds of pies, which led me to cake recipes; and it pretty much smacked me upside the head.  The classic no-bake cheesecake. Which fit perfectly, given the gimmick in the movie is that the character does not bake the pie. 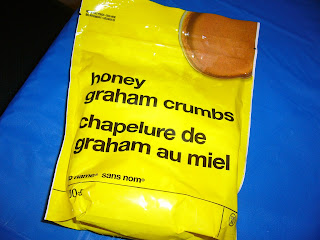 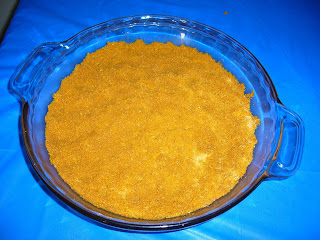 So for the crust, I used pre-crumbled graham cracker crumbs. and butter.

The recipe on the back of the bag called for 1 and 1/4 cup of the crumbs, but my pie plate was a bit larger so I had closer to 2 cups of the crumbs.

1/4 cup of the butter melted. Again, because my pie plate is just a little larger, I added an extra tablespoon of the butter.

Mix well, and flatten out into pie plate. 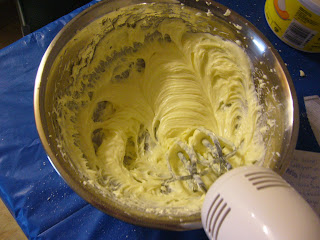 mixing the cream cheese and sugar until smooth, then fold in the cool whip. 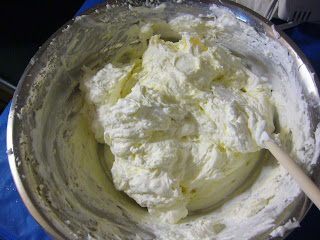 Drain the pineapple, adding the pieces to the mix,
make sure to mix it well.

pour into the crust, and chill for 3 hours. 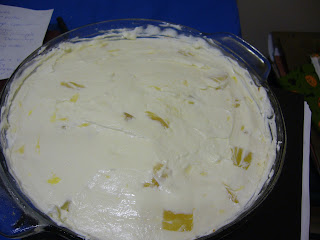 I've got another recipe coming up, inspired by the movie Elvira Mistress of the Dark, which should have you rolling in the aisles.