It's Hallowe'en. And I had hoped to have this big picture fest of projects done for this season finale post. But, some parts failed, other things didn't get completed, and still other items just never fitted in with the scheme of it.   So I thought, I'd go nostalgic serving up some sex, blood, and rock n roll. 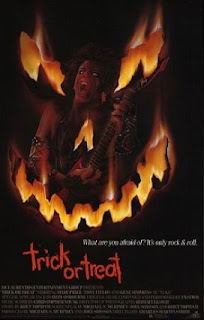 plot: High school student Eddie Weinbauer is the ultimate Sammi Curr fan. When the news of the heavy metal singer's death hits him, Eddie begins to feel like the world is against him. Which is only impacted by the fact the school jocks have been bullying him a lot. After receiving the last known unreleased record of Curr's from the local radio dj, Eddie experiences Curr's spirit talking to him from beyond the grave. Every time Eddie plays the record backwards, a new message seems to appear with just the right advice. Eddie himself seems content with getting the jocks sent to detention and suspended from school, but Curr has other plans. Before long, Eddie, his new girlfriend, and his best friend Roger, find themselves having to battle the deranged spirit of Curr.

This is the 1986 heavy metal horror classic starring Marc Price and Tony Fields.
The film always seems to get remembered for the short guest cameos by Gene Simmons and Ozzy Osbourne. That and the killer soundtrack.

And the big debate is what was Sammi Curr?  Most fans take it at face value and just write him off as being a straight up ghost. Which on one hand is true. Some chalk him up as a demon. He's also a vampire (he needs to feed on energy be it people's life force or electricity), and an elemental (he is pure electric pulses, more like lightening then the fire that killed him). You can also classify him as a witch, because of the ritual that caused his death to begin with.  All this makes him the perfect horror villain. Unstoppable, uncaring, with knowledge from beyond the grave. 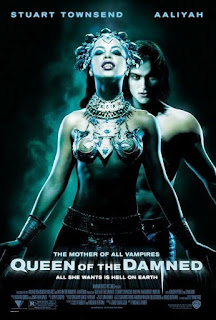 Queen of the Damned

plot: Vampire Lestat has become the biggest rock star on the planet. And for one night only, will be preforming live. Only there is more then just his devoted fans who are planning on coming to the show. He's angered the vampire community by telling the world about the other vampires, breaking a vow of silence. He's even managed to get the attention of the first vampire, Akasha, who's been in a coma for thousands of years. Kidnapping him, Akasha plans on removing humanity from the planet.

This is the 2002 horror drama starring Stuart Townsend and Aaliyah. Based on two novels by Anne Rice - The Vampire Lestat and The Queen of the Damned.

I love this movie. But, not as much as I did the books.  Totally to be expected though. And the soundtrack, it's to die for! The choice of Townsend to play Lestat at that point in the narrative, was a fairly good one. He manages to capture the smugness the character has in that point of The Vampire Chronicles. The books were done in the 1980's, and I think the only real downfall is that they didn't set the movie in the 1980's as well.

And what's a movie without snacks? Here's my Witches of Eastwick party mix 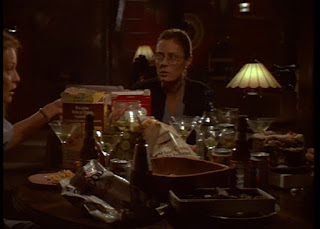 Everyone remembers the cherries in Witches of Eastwick. But, I couldn't get a scene from the original book out of my head when watching it the other day...yes you read that right.  I was watching the movie, which made me think of the book and how the original novel points out how the characters have very different eating habits. One eats only salty food, one only eats sweet etc. (Sukie in the book only eats crunchy-nutty things like celery, nuts, pretzels) So I always get stuck on the opening martini scene, and the spread of snacks. 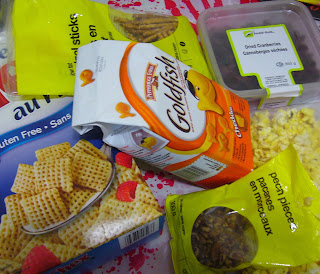 I went really basic with this too, Rice Chex cereal, pretzel sticks, pecan pieces, buttered popcorn, cheese flavoured goldfish (because they are on a coastal fishing area), and dried cranberries (couldn't find cherries) I thought this was a fabulous Hallowe'en treat. 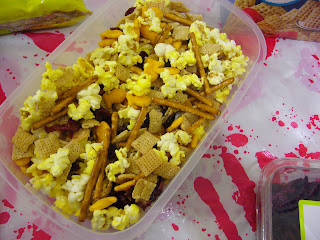 I had planned on doing a big meal, but backed off because Witches of Eastwick will be my second hosting gig in 2016 for Food n Flix.

Posted by Domestic and Damned at 7:09 PM