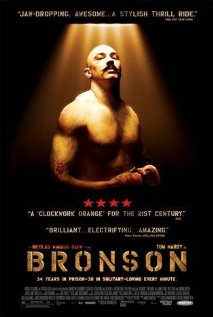 plot: Following the 34 years that Charlie Bronson was in prison in Britain for petty theft.

This is based on a true story.

If you've paid any attention to anything I've said over time, you know I love Tom Hardy.  I had stayed away from this originally because I'm not real big on prison stories, but everyone has told me that it's his best work ever.
I went into this film thinking it was going to be like an episode of OZ, but was surprised to see it wasn't.

The violence is there, but not in the way you would expect. It's not gory or extreme just for shock value.  It is there to help get the message across. I found the violent outbursts of "f***-off" to be more brutal at times then the actual fighting scenes. The raw emotion that Hardy manages to tap into when you lest expect it, rattles you.

I know the trailer for this called it the Clockwork Orange for the 21st century. And I can see that clearly, but there are moments when I kept comparing this to Rocky Horror Picture Show; mostly because of the scenes with the stage and audience.  It just seemed to have that flow for me.

And to address the nudity.  Yes it's there.  Hardy's character spends a lot of time completely naked in many of his fight scenes. But it's never sexual. It's always an extension of the battle he's about to partake in. Those scenes ironically, have him with is shoes on and his hands tapped up like a boxer. It's like the alpha in a pack showing that he's ready to do what needs to be done.

what do i think i learned from this film?
The system may have failed Mr. Bronson, but he seemed to understand that he could make the best of it without loosing his morals.
Posted by Domestic and Damned at 12:36 PM