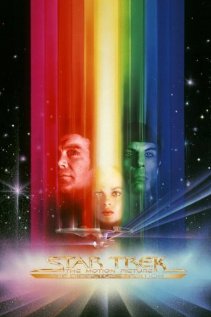 plot: Kirk takes command of the Enterprise in order to help stop a machine based threat from destroying Earth. But after one of his crew is taken and replaced by a robot, another makes the ultimate sacrifice.

You can pretty much say, this was the beginning of the Borg that would show up throughout all the other series and films.
Two characters who were introduced in this film only to end up dying as they become part of the machine.  It's creepy and brilliant all at the same time.

We're talking 1979 here. The story is confusing and thin, while the effects are comical now, they were the best in the world at that time. The downfall of the film is the amount of effects that were used.
There are these scenes of rich dialogue that though were sparse, showed the fact the film was character driven. Then you're given these long pieces of effects for the sake of the effects which I found broke the story for me. I would rather be carried away by a really great scene of witty dialogue then by effects.

There has been so much said good, bad, mediocre about the first ST movie, that I'll keep my post fairly short.  BUT, I did like the idea that there needed to be a duel element of "god and goddess" to create something new. One of the final scenes had the crew talking about a new lifeform, which could not have happened if the male and female crew members hadn't agreed to give themselves over to the machine.
This gives the seemingly odd comment by the character of Ilia when she's introduced in the beginning about her vow of celibacy a purpose. Total foreshadowing for her role in things.

what do i think i learned from this film?
Resistance is futile.
Posted by Domestic and Damned at 9:12 AM