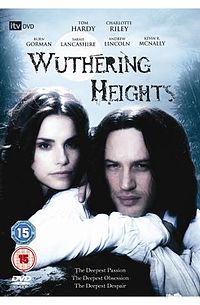 plot: Heathcliff  is taken in by a wealthy man, raised alongside his two children. As they grow up, the daughter falls in love with him but they are kept apart by the older brother. Soon, Heathcliff driven by a broken heart, plots revenge on everyone that helped to keep them apart.

Based on the classic novel of the same name.

This is also a made for tv movie.

I was swept away by the story.  This is one of those stories that everyone knows, but might not be aware that you know.
I've never read the novel, never seen an adaptation of it before, but the story is one that's been told so often in other things - like soap operas- that I knew it on a subconscious level.

I had one thought while watching this,  when does pure love turn into unspeakable cruelty?

There is a bit of  a taste of what Pride and Prejudice lends to.  The idea that no matter how much the character of Cathy loved Heathcliff, she was too prideful to allow herself to be just his wife. She wanted to be more and make a larger name for herself.
You see how  Heathcliff's purity becomes obsession for what is owed him, and how he lets it turn him into what he hates the most.

what do i think i learned from this film?
Real passion has a way of devouring a pure soul until either they become expressive in a creative way or in a destructive one, leveling everything in their path that inspired them.
Posted by Domestic and Damned at 10:04 AM