What that movie inspired me to do 44

It's that time again, the time of the season when we have season finales of all our favourite shows (if they're not mid season shows that is) and myself and my friend Heather from All Roads Lead to the Kitchen, have a shared lust for Supernatural.  So of course we had to turn that into blog posts.

As like with our 80's Day last month,(we've got another coming up soon) we have not told the other person which episodes/seasons/characters have inspired us to make what we decided to make.

And with 11 seasons of the show in the bag there was a lot to choose from. (I'm only pulling from the first 10 seasons as that's what is available on dvd at the time of this post) I can't wait for next season, it can't get here fast enough for me.  I sat down and thought about some of my favourite episodes from seasons 1-10 and came up with this list for today.   Clap Your Hands if You Believe (season 6 episode 9) Mystery Spot (season 3 episode 11) and Bad Day at Black Rock (season 3 episode 3)  which ironically, are more of the comedic episodes. 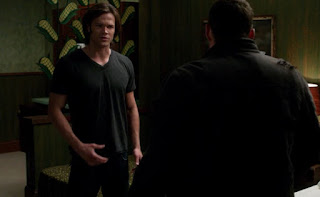 Clap Your Hands if You Believe - the plot: The brothers are called into to investigate what they think is at first alien attacks, but it turns out to be fairies.    the food: corn, beer, coffee, whiskey, pizza rolls, cookies, tea, cream, sugar, salt. 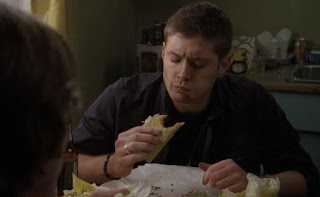 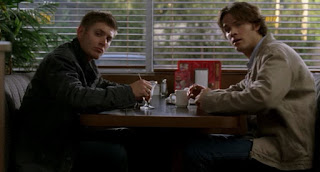 Bad Day at Black Rock- the plot: The boys learn that a cursed rabbit's foot has been stolen from the family storage unit, which gives it's victims a roll of unbelievable good luck until it kills them.    the food: whiskey, garlic bread, ice cream, coffee, BLT sandwich, pop, fries, burgers, wine.

I wanted to at first, make something from each episode, but in the end for convenience made the one dish. So, pulling the ingredients of hot sauce and garlic from Mystery Spot, the corn from Clap Your Hands if you Believe, and burger from Bad Day at Black Rock plus the title; I made  "Black Bean Burger with Corn chips and salsa". 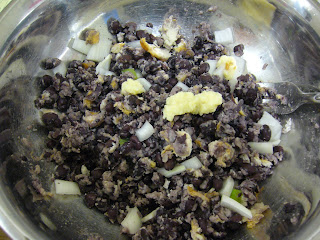 1 can of black beans, drained,
3 pieces of bread pinched up for breadcrumbs,
half an onion chopped,
half a green pepper chopped,
1 teaspoon minced garlic,
2 eggs,
salt,
ground black pepper,
hot sauce to your taste,

I started to mash up the beans, but I have to admit, I don't have a food processor so I was doing it by hand with an old fashioned potato masher, and got fed up mid way, so half my beans were mashed half were not.

I set the mix in the fridge for half an hour so that it was firm enough to form into paddies. Depending on how thick you make them, you will get anywhere from 4-6 paddies.

I then pan fried them in a bit of oil for about five minutes on each side. Topped them with melted cheese, the corn chips and salsa (instead of on the side and both store bought) 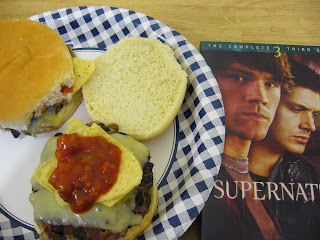 Now, go check out Heather's offering. And check back with us later this week to see what else we've been inspired to do.

Posted by Domestic and Damned at 12:08 AM