What that movie inspired me to do 45

Back a few months ago, I was talking to Heather from All Roads Lead to the Kitchen, about the new Alice in Wonderland sequel. I had at that time, been thinking about doing a post inspired by the story/movie. (which would have been back in March for my birthday post...but I ended up not doing a birthday post) Timing is everything, and we decided to do posts inspired by the Alice stories, to correspond with the sequel's release this weekend. Alice Through the Looking Glass.

While watching the movies again, I couldn't get the idea of mushrooms out of my head. Because the Caterpillar sits on one and they are everywhere. I also couldn't stop thinking of the Queen of Hearts' tarts, and of course the Mad Hatter's Tea Party.

So I decided, to mix some of that together, and threw myself an unbirthday party (UN-bIRthdAY PaaARrr-TEA ...big "U" big "N" accent on the tea)

This I have to admit, was not the easiest blog post I've ever done. It was in fact frustratingly brutal. I went from the original idea of a straight up Mad Hatter's Tea Party but had issues with menu ideas other than just tea and tea-sandwiches, to mushroom tarts which exploded twice in my oven, to a cake that wouldn't hold up.   In the end, I pulled together what I could from the mess and thought I'd hand in my homework anyways. Trust me, some point down the line, I'll do another Alice in Wonderland themed dinner to try and make up for it. 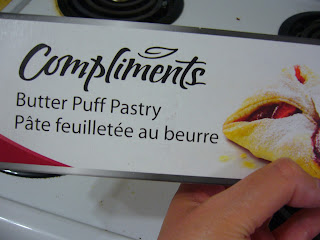 For the mushroom tarts

I used a pre-packaged dough,
half an onion rough chopped
ground black pepper,
two large white mushrooms rough chopped
some cheese
and a can of cream of mushroom soup
I layered everything into the dough first, than spooned in the soup about three Tablespoons each. 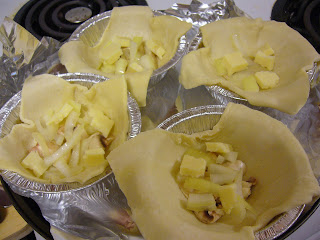 The cake was a boxed cake...lemon. And the icing was as well. 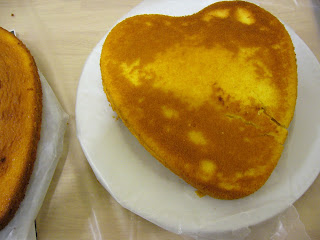 The cake, started to crack and split down the middle before I even got it half way icing-ed...iced...frosted. 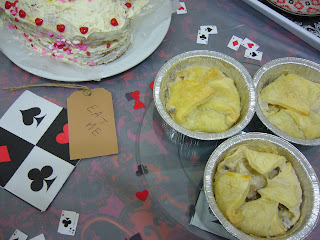 And the sprinkles, which were little red/white/pink hearts fell off the sides. There was more on the table than the cake. 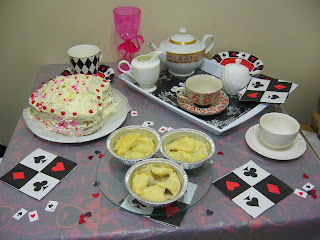 I forgot the tea! Ironic as it is, and probably the biggest screw up of the project. But I'd put everything away before I realized the tea didn't make it to the photo. 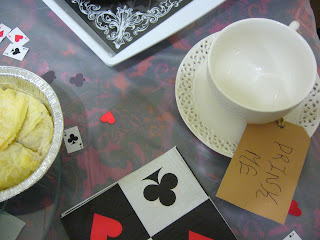 So not my best week in the kitchen, nor my prettiest. But, I have to tell you, it tasted really good. If you haven't checked out what Heather has to offer, do so now. (her blog)

Posted by Domestic and Damned at 9:21 PM