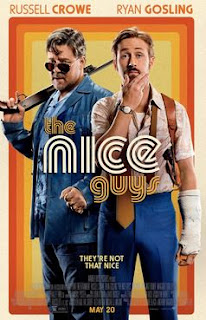 Set in the late 1970's, this movie had me thinking of those old made for tv movies/detective series like McMillan & Wife, and Starsky & Hutch.  There was one scene where Gosling's character is frightened by a corpse where he's unable to scream, which is straight up Abbot and Costello.

This is a buddy film no doubt around it, but, the addition of the fact the one character's daughter tags along on most of the case, rounds out the team. I think in some ways, it helps to ground the otherwise over the top-ness of it, keeping the film from going to a level of unneeded gore. The violence is there, but it manages to pull back at a decent enough hour to keep it's integrity.  Which is actually a theme in itself. As Gosling's character is constantly making comments about how his daughter is facing a society of perverts and cons.
The comedic timing and chemistry between the two leads could easily be harvested for at lest one more movie.

If you've been reading any of my stuff for the last while, you know that I love it when stories get back to basics. When they are set in a way that forces the characters to "do the work do the research". And having this set in 1977, when there was no choice but to hit the library or use a pay-phone, adds a layer to it. We follow the leads for about a week as they cris cross their way across L.A. following clues and uncovering three different plots. Supposed kidnapping-murder-cover up.

Both the characters have been hurt, the Gosling character having lost his wife in a fire and is a single dad with a drinking problem, and the Crowe character having gone through a divorce. There is actually a great line where Crowe's character just beat a man nearly to death and stops saying "you owe your life to a 13 year old" after the little girl tells him if he continues she'll never speak to him again.

what did I learn? Sometimes you're really not that paranoid they really are out to get you.

Posted by Domestic and Damned at 5:39 PM