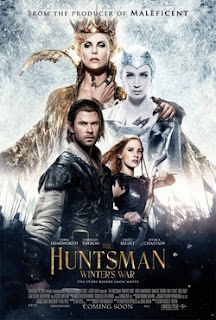 plot: After having her heart broken by the death of her child, the sister of the Evil Queen begins to form an army of children, with the Huntsman as her bravest warrior.

You feel like you sort of have two separate movies going here. The one with the Huntsman's backstory, and the one between the two queens.  The queens story is sort of the bookends for the Huntsman's story. Both parts are suppose to fit, but they almost don't gel.

I liked the introduction of the Snow Queen, I thought Emily Blunt played it well, and I've never been one for snow queen stories.  I actually could have done without half the Huntsman's story, and would have loved to have seen more of the two queens back story.

It plays a bit too expected for me. You have the Huntsman and his wife separated by a spell, and the two battling it out for a good chunk of time, until they have to join forces to battle the queens.  That's another issue I had, you sort of get the impression that the Snow Queen is the badder of the two, then the rug is pulled out from under you and the Evil Queen becomes the badder of them, with the Snow Queen the victim. I didn't care for that line of back and forth so quickly in the story. It would worked better if they had given more time to both characters.

There really isn't much to say on this. Snow White is a footnote in this movie. Which I'm fine with, as Snow White has never been a favourite character of mine. None of the scenes really stood out enough for me to pick apart. Other than the fact the Evil Queen has something like 7 wardrobe changes in under 15 minutes of air time. All of which are suppose to be within a few hours in the story.

what did I learn? Ever notice that all fantasy/sci-fi quest stories are buddy road trip stories?

Posted by Domestic and Damned at 4:22 PM