This month's Food n Flix  selection is being hosted by Cheap Ethnic Eatz, and they picked Butter. 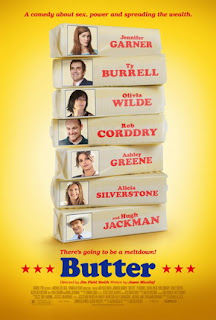 plot: A young girl decides to enter the yearly butter sculpting challenge after seeing it done at her state fair. The other competitors are the wife of the former champion who'd won it for fifteen years straight, and the stripper he'd had an affair with; who happens to be blackmailing his family.

This is a 2011 comedy-drama starring Alicia Silverstone and Jennifer Garner.

I saw this back at the new year, and was going to do a write up about it then, but held off when I learned it was on the list for the group. I get that's a political satire, but I wasn't feeling it. Maybe because it was a political film?

And again, I watched this online, so you will notice a lack of dvd cover in the photos.

I've been vegetarian for over a decade so this should have been a snap, given all the vegan related items seen in the fridge of the foster mom played by Alicia Silverstone.(yeah she did this film about the same time her vegan cookbook came out) Side note, I've had vegan pop and you can't tell it's vegan at all. I have no idea how pop can be vegan given it's still processed but...
So obviously, I had planned on going with the butternut squash noodles with cauliflower puree, cause when have any of you dear Spudguns! known me to pass up a penis related situation.  But...the movie gods or culinary gods, or St. Lorenzo(yeah cooks really do have a patron saint) didn't feel I prayed to him enough or something; cause the grocery here was out of butternut squash for the last few weeks.
So my next thought was....butter pecan tarts.

A Canadian classic in a not so classic way.  I decided to make it a tart...not little single tarts. And I went with a shortbread crust. 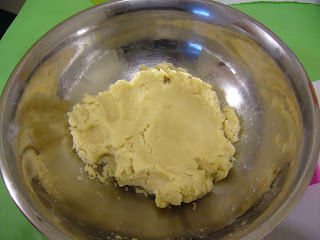 Combine till dough is ready to form in pie pan. 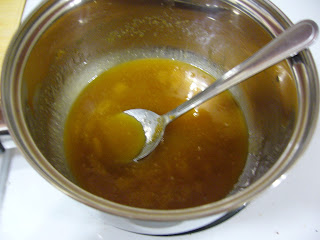 Melt butter and brown sugar over medium heat, stirring till it bubbles, then remove from heat.  Set aside for a few minutes.
Whisk in the eggs, syrup, lemon juice, vanilla, and salt.
Stir for about five minutes and then add pecans. 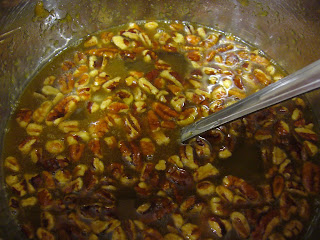 Press dough into the pie pan, and pour the filling over, baking for 10-15 minutes depending on your oven.

Lower heat to 350 degrees and continue to bake for another 15 minutes depending on your oven. 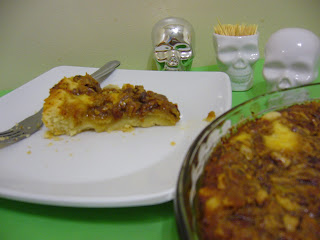 This surprisingly, is not as sweet as traditional butter tarts are.  I say surprisingly, given the amount of maple syrup and brown sugar are in it.

This one came out a little on the "short" side; as my pie pan was just a bit large for the amount of crust I made.  I know, bad me for not considering that factor, but it's a new pie dish and...yeah. Just wanted to use it damn it!

I also did not add any raisins, as most butter tarts have raisins which add to the sweetness. 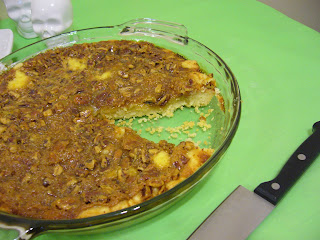 I was afraid I was going to have to change the plan yet again, as we suddenly had a massive turn in weather.  This little apartment became such an oven all on it's own, the butter I had out to soften, melting from the muggy-humidity here.
Kinda wish I'd been quick enough to snap a photo of the butter as it melted in the mixing bowl, but at that point I just wanted to get the recipe done.

Posted by Domestic and Damned at 7:37 PM