You knew this one was coming! 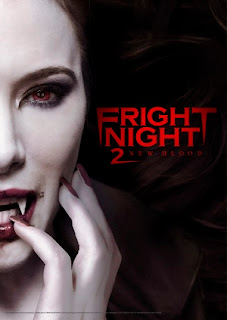 plot:While in Romania, exchange students Charlie, Amy and Evil, find themselves at the mercy of their professor Gerri Dandridge, who as it turns out is a vampire. Not only is she a vampire, she's the legendary Elizabeth Bathory. After the police refuse to believe him, Charlie lets Evil talk him into asking tv star and ghost hunter Peter Vincent to help them. But time is running out, as Bathory has kidnapped Amy upon discovering she was born at the stroke of midnight on a full blood moon; and drinking her blood will turn the countess into a daywalker.

This is the 2013 remake starring Jamie Murray and Will Payne.

I read the reviews for this over a year ago, at at the time they were all negative. I have a feeling the reviews were written by folks who didn't actually sit through even half of the film; because damn this was a really good movie.

Putting the "2" in the title is a mislead though. As this is a remake of both the original 1985 and 2011 versions, and not really much to do with the 1989 sequel.  The only connection this might have with the 1989 film is that we have a female vampire lead.

There are a few minor plot twists in this -other then the Countess Bathory element- one has to do with Charlie's sacrifice in the last few minutes of the film, and shift in Peter Vincent.

I have to say, the way the Peter Vincent character was done this time around, which was basically a mix of both previous versions of him - he's a desperate tv star needing quick cash like the original version played by the late Roddy McDowall and a bit of the occult collecting geek version played by David Tennant- was brilliant.

Instead of using mirrors as their vampire test like in the other films, we get the use of a camera phone, with no vampire showing up on film.  And the addition of bat sonar was not just a first for the series, but as far as I can say right now, for vampire movies in general. Where as in other vamp films we see the vampires become bats, this time we see them just have the ability to use sound waves to locate objects; and as a weapon.

All in all, it keeps to the main soul of the original while expanding on the story. I really liked it.

Posted by Domestic and Damned at 2:08 PM