Spudguns!  How's your morning treating you? Or your evening depending on where and when you catch this.

So, you might have noticed that the One Movie A Day Challenge, this year has some gaps in it. That is both good and bad depending on your point of view.  Bad because that means I suck at finishing things, Good because that means I halfway got a life and don't have the same kind of time to sit in front of the tv and blog all day.

I am however, already starting to think about Hallowe'en week's posts. Which is ironic when you think about it.

Speaking of the never ending serial-soap opera The Nosferatu Adventures,  you know how the infamous vampire binder and lunchbox were written in because I had them in real life first; well faithful readers, you might remember the charm bracelet  Nosferatu is wearing in a few of the alternate realities (s4 p1) It's real too. Well, half of it is real. So far, I've gotten the bat, wolf, dream catcher, and a pirate ship...well pirate ship-ish. I know, it's suppose to be a pirate flag with skull and cross bones, but I had trouble finding one. 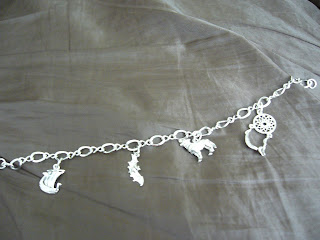 The Nosferatu Adventures has been a part of my life for the last 3 and a half years, which is amazing considering it was designed to be only 6 parts over the course of one year just as filler for the blog.  I eat, sleep and breathe these characters. It's not unusual to see me roaming the city mumbling about werewolves and sidhes and how Dagan would never say that or Loki has gotten too human.  I'm not kidding, I dream about these characters constantly, to the point I wake up in the middle of the night and start scribbling notes. I keep finding post-it notes from two years ago in the bottom of my purse, with ideas that I'm only getting around to now.

Earth Angel- by the Penguins
Still of the Night- by The Five Satins
Mr. Sandman- by the Chordettes
She Boom- by the Crew Cuts
Someone to Watch Over Me- by Frank Sinatra

Posted by Domestic and Damned at 7:53 AM