plot: We follow the life of a group of vampires, as told by one member of a vampire family to a young reporter.

We're brought into this mysterious world of forbidden love. I've never really considered this a typical love story, but at the core of it, it's a love story. You've got a man grieving for the loss of his family, wanting to kill himself but not having the guts to do so. This in turn, makes him vulnerable to some of the worst elements out there. One of which becomes his killer/savoir/brother/lover.  Louis becomes entrapped in a world he never really wanted to be part of, but manages to make the best of.

The first half is that buddy comedy element going on, as the two vampires, Lestat and Louis, travel from place to place, destroying everything in their path, sometimes on purpose sometimes by accident. This then becomes a morality tale when they "adopt" their daughter Claudia. The last part of the film then becomes this action adventure plot, where our lone hero must overcome his past sins and gets revenge on everyone.

Some of my favourite scenes are the fires -both the plantation and the theater, the haircut, the stage play, the whores in the coffin.

There is something deliciously wicked when Lestat jumps into the burning house and screams at Louis about burning down everything. "Will you have us living in a field like cattle?" it shows the divide between the way the two men think. Louis just wants to have a normal life, while Lestat wants to live like a prince. He likes the comfort and status that their plantation has provided so far, but for Louis it's like being caged in. It's Louis' first real act of rebellion. The first time we see him make a choice on his own for his own sake, and not because someone forced him into something.

The scene where Lestat is teasing the woman after half draining her, locking her in the coffin; makes me laugh every time. The perverseness of it is slick in it's own way. Here he is trying his damnedest to get the one person on the planet he cares about to open up to himself, even if it's a torturous lesson. He's cruel because he knows it's the only way to get through to the stubbornness in Louis. And we see just how Louis is disgusted by that side of himself. He's shamed by his own very nature.

The realization that Claudia will never grow up, is one of the most painful scenes I think. Here we have a grown woman who is stuck in the body of a five year old. She is frustrated with her situation, not getting any results from what is essentially overbearing parents, and in doing something as simple as cutting her hair; realizes the truth of her own situation. The very lack of independence is what forces her to make such drastic decisions, and what basically makes her colder and less human than those who created her. (and this is where I can't help but compare it to the relationships in Frankenstein)  It's like dealing with a handicap that you never have a chance to be cured of.
This later on is what fuels Claudia to search out a "new mother" when she demands Madeleine be turned.

The scene later in the film, where after what is years of searching for answers, for more of their kind, the characters of Louis and Claudia find themselves at the Theater de Vampires. "Vampires pretending to be humans pretending to be vampires".  The very quote sums up the whole idea of these villains. The group feel they are above society, above humans and therefore above the other vampires. When they find out about Claudia, they consider her an abomination. A creature who's very existence goes against not just their laws, but the laws of man. They - the group- do not see this relationship as a father/daughter one, but as lovers because that's how they view each other. Not as family but as love/marriages.
The scene that bridges this to the next of my favourites, is when the character of Estelle breaks into the hotel room right after Louis has been forced to turn Madeleine (the equivalent to vampire rape) and screams "It's time for Justice Little One!" always brings a smile to my face. The story's tone then turns even darker with that punctuation that, they who openingly feed mocking their victims, even they have standards that they won't cross.
Then of course, there is the second fire scene where Louis has the showdown with Santiago. It's like the best of the alphas fighting it out. Up till that point, we are to believe that Armand is the alpha of the group, but in fact it is Santiago.

what did I learn? Love will always come with a price. 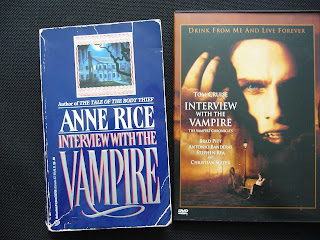 Book: Louis, a centuries old vampire, is giving a young reporter a detailed account of his life from the time he's killed as a human, on ward. He speaks of the love/hate relationship he has with the vampire who made him, Lestat, and the love for the vampire child the two created together. He speaks of the despair he's felt over the decades, from loss, as well as the constant search for purpose, for meaning.

I have to say, this is the second time I've read this book. The first time was 30 years ago, when I was 12. I got so much more out of it this time around. Partly because I had been 12 when I read it last.  So the main themes here are loneliness, addiction, depression, fear, the search for higher purpose/higher powers, dominance, family values, acceptance, beauty, love...it can go on for awhile. Anne Rice covers a lot.
Anne Rice has been stated as written it during a dark time in her life, (the death of her daughter which is the base for the character of Claudia) and you feel that in the pages. You see the pinpoints of "what does it all mean? Why did you do this to me?" from the two main characters of Louis and Claudia, both subtly and in their dialogue/actions.

There is one scene middle of the book where Louis finally understands that Claudia is not a child any longer, and hasn't been for decades. He had been oblivious to the fact that just because her body stayed that of a 5 year old, her brain matured to her real age; which at that point in the story is 70 years old (she comments that they have been together for 65 years already) And the way she carries herself, the way she dresses and the topics of conversations, proves that she's more than an adult. It's punctuated farther with her making a comment about how she could pass for a "little person" like they've seen at the circus.
Claudia is the combined creature of both Louis and Lestat; both the good and bad traits they carry. As any child is a creation of both their parents. Louis refers to her as his daughter and him the father, but that's only after they have left New Orleans behind. Up till that point, Louis plays more of the mother figure, and Lestat the father figure, as it's Lestat who trains her to hunt.  It's clear from the start of the threesome, that Claudia has the same manipulative streak as Lestat does, as she uses it to control Louis on every level.
She's also the desperate reaction of Lestat to keep Louis. The two male vampires have been together for at lest 50 years before creating her, and Louis is tired of their relationship. On the night that he informs Lestat that he's leaving him in order to have a life of his own, Lestat turns Claudia. It's the vampire equivalent of getting pregnant in a desperate plea to save the marriage. Which, to this point has been a bit of an arranged marriage to begin with. As Lestat originally turned Louis in order to get his money.

In the book, Louis is grieving over the death of his younger brother. (movie version it's a wife and child) and you get the impression that at first, he sees Lestat as a bit of a replacement brother. But, it becomes vastly clear that it's a lover relationship gone wrong. The relationship, as well as most (Lestat/Claudia, Claudia/Madeleine, Armand/Louis,) is referred to as a Master/Slave relationship more that once. (just like the Dracula/Renfield relationship) Which mirrors in this case, the slave owners that they happen to be earlier on in the story when they still own the plantations. I've discussed this before in other posts, that -that in itself is a form of vampirism. The taking of someone's will/freedom/generosity on a continuous basis without ever giving back.  Part of this is shown in the fact whenever the two younger vampires ask for their personal history, Lestat denies them any relief. Which they turn the tables on him, by leaving him for dead and having to struggle to survive.

I loved the scenes where they talk about the physical pains, the physical reactions to not feeding. How they describe the pounding headaches, the feeling like their veins are going to explode, the after effects of the withdrawals. Which is a great metaphor for the effects, both physical and psychological for addiction. And the scenes when they are going for the feed, which is attuned to sex. They draw you in, both sides of the coin, the good and the bad of it. There is a perverse beauty to it.

The one big criticism I always had with the book was the ending.  I know that one of the big themes was being unable to let go of past hurts, but the idea that this all encompassing creature Lestat, would become a helpless old man practically drooling on his shoes, always pissed me off. I know that's weird to say, but it always felt like a cheat to me.

I'm going to shut up now.  Next month we're covering the movie Disney's Hocus Pocus and the novel Carmilla by Sheridan Le Fenu. I'll be back later in the week with the official on that.

EDIT NOTE... IF YOU HAVENT CHECKED OUT HEATHER'S OFFERING OVER AT ALL ROADS LEAD TO THE KITCHEN  YOU NEED TO...she made crawfish.
Posted by Domestic and Damned at 4:47 PM