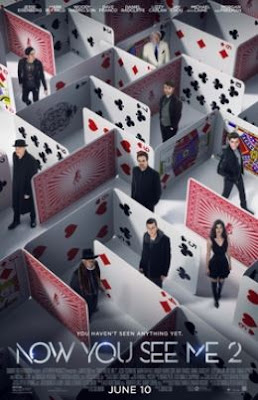 plot: A group of street magicians expose the worlds biggest corporate thieves with elaborate stage shows. This time, the jokes on them.

I sort of don't know what to say about this. You've got your set up, with the introduction of all the main players, both the old cast and the new cast, there are chase scenes ontop of chase scenes, and little street magic to really tie it all together. I was disappointed in this on certain levels. (I took two bathroom breaks during the film so you know my attention was not kept)  I feel one of the best elements was the fact Harrelson plays two different characters.
It was interesting casting Daniel Radcliffe as the "non magician" in this given he's famous for playing one of the most famous magi.

There is a scene where they are sent in to steal a microchip and have to pass it around while the guards search them. Which is a perfectly interesting scene, just it ran too long. They could have cut a few minutes off it. We see the object go through the group more than once, following it sometimes to the point it's blurred out. Such as the segment when Eisenberg's character stuffs it down his shirt and it travels by CGI down his pant leg to the floor. The jokes don't pay off the way they should have.

what did I learn? you can do a lot with a strobe light.

Posted by Domestic and Damned at 9:15 AM