plot: When a group of paranormal researchers stumble upon a doorway to the realm of the dead, they end up having to use all their resources in order to save New York from an apocalypse.

Ghosts, hauntings, paranormal research...before it was trendy. I love the little nods to H.P. Lovecraft in this, with the idea of having a cult from the 1920's and the names of the gods. Zuul and Vinz Clortho. (very Cthulhu) and to Aleister Crowley (the fact the two possessed Dana and Louis have to use sex magick to open the seal/gateway) There are hints of real occultism running wild through this whole film.

At the time this originally came out, it was more acceptable to be talking about cults than it was the paranormal, so it's no wonder they made the plot run around a long dead cult leader who wanted to bring about the end of the world. (and maybe a little prophetic too given the last decade) as society was still coming off the Manson Family and the fear of cults were the topic de jour.  Another big theme that was everywhere back in the 80's was the little man vs the corporations. In this case, you've got the team having to battle the environmental protection agency; who are trying to (and succeed for a brief time) shut down their main containment vault. This was also a point in society where "environment issues" was starting to really become catch phrases in the headlines. So basically, everything that you remember hearing in the news back in 1984, found its way into the film, be it in your face or just hiding under the bed.

Of course, I have to mention the fact we have a "keymaster" who is male, and a "gatekeeper" who is female, going back to the idea of ancient fertility rites, that a lot of old societies had. Every pagan religion, believed in the duality of things. In this case, it takes both the male and female "joining" in order to "bring forth" the third element which is the god.  (sex magick still the strongest form of power raising)

This would have never made it as a straight up horror. Weird to say, but it needed the comedic elements for it to be digestible at the time.

what did I learn? Class Five Full Roaming Vapor

This is also the second round of 80's Day! Totally tubular. Really, did you think I would pick anything other than the original Ghostbusters given it's Ghostbusters week?

okay so my first instinct was to do a rice crispy treat with vegan marshmallows, only they don't sell those here. So I actually tried to make my own vegan marshmallows. The treats tasted great. BUT, even with being in the freezer for over 8 hours, the second I took them out, they fell apart, and no amount of "shaping" them worked.  So that left me scrambling trying to figure out a new recipe, and I was desperate not to have to switch movies and start all over.
We see cans of soup in one of the kitchen scenes, and plenty of veggies so thinking of how to tie that in, all I could think was Slimmer.
Oh yeah, I went there. What I ended up going with was a version of a green goddess soup. 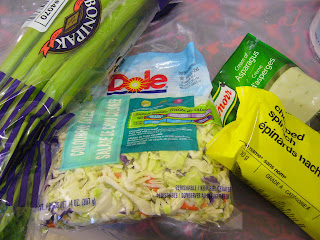 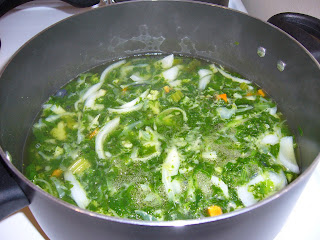 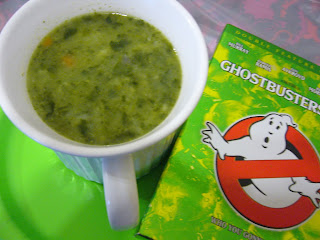 As always, I just rough chopped everything, and had a few cheats.  I used half the package of the cole slaw, which had both green and purple cabbage as well as carrot, and half the package of spinach.
As well as about a half cup of both the broccoli and cauliflower.
Half a medium onion, and one stalk of celery.

I cooked the veggies down first for about 45 minutes, then added the cream of asparagus soup and almond milk.  I have to say, at first it had a beautiful shade of green once I added those two ingredients, but the almond milk separated and the colour went back to a darker shade.

So I'm not alone in this 80's Day theme post. As always, my friend Heather over at All Roads Lead to the Kitchen, has made something too. And this this is always my favourite part of the whole challenge; neither of us has told the other what movie we decided to do today. So head on over to her blog (here) and see what she has on the stove...awesome.

Posted by Domestic and Damned at 7:18 AM