plot: When a town is suddenly struck by an unknown virus that turns everyone into flesh eating zombies, it's up to three boy scouts and one cocktail waitress to find a way to stop it from spreading.

This film is right in there with Zombieland, Return of the Living Dead, Zombie Strippers and Monster Squad. It's like the best ideas from all these just rolled into one.

This is one of those movies that are for fun. There really wasn't a whole lot of "the moral of the story" going on, other than not to prejudge anyone. We see the scientist who is "containing" the virus in the beginning, being momentarily stupid, by leaving the undead dude for a bag of chips. Turning his back on the lab. You just want to yell at him to look behind him. Lest I did.  There is another scene later on when the two main characters hit a deer on the road, assuming it's totally dead, only to have it jump up and kill their scout leader. It's like horror 101, never assume anyone is dead-dead.

I have got to say, the whole Dolly Parton thing the scout leader has going on, was never fully explained. I don't know if he was obsessed in love with her, or if he was suppose to be obsessed female impersonator? But props to the props people for finding so many bits of Dolly Parton collectables.

There are a few sexual jokes, that although are really funny, such as the extendable zombie penis, that actually distract from the action. You're in the middle of what should be this extreme panic mode, and then the gag reminds you this is a bunch of teenagers.

what did I learn? It's a good idea to always be prepared for everything.

So, as my title says, it's zombie day. My friend Heather, over at All Roads Lead to the Kitchen, has started a group of posts called In the Kitchen with Zombie Fiction.  Basically, zombies are to her what vampires are to me. When she said she had in mind to cover this movie, I told her I'd jump in this month.

I wasn't too sure what to do for this one, but I just could not get the scene out of my head where the neighbour played by Leachman, looses her dentures while attacking the one character, gumming at his arse. The fact there is a lot of convenience food in this film, had me thinking along the lines of something out of the vending machine.
I also have this theory that soup is the ultimate survival food. If you can find a few ingredients and water, you can make soup.  So, I ended up going with a version of a black bean soup. 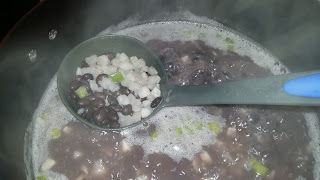 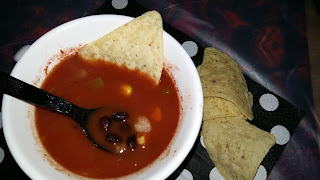 As I said, I drained the can of beans, because I personally do not at all care for the "black colour" you get when using them. It's unappealing to me on so many levels.

I really wanted to give this some cute little title to tie it in with the whole Dolly Parton theme in the movie, but I just could not think of anything.

Okay, so don't forget to run over to Heather's blog now and see what she came up with.

Posted by Domestic and Damned at 7:15 AM