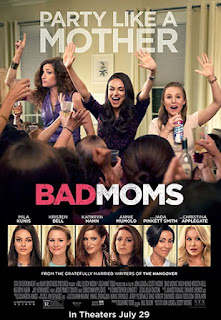 plot: After finding out her husband is cheating on her, an overstretched mother of two decides she's had enough, and refuses to clean, cook or work; choosing instead to hang out with her new overworked mom friends.

What starts off as a "starting over" buddy comedy, breaks down into nothing more than a popularity contest between the two moms played by Kunis and Christina Applegate. With jokes that made it feel like every formulaic Hallmark made for tv  movie to have come out in the last few years, than the big budget film it is.

The stay at home mom, played by Kristen Bell, had a brilliant set up storyline that never actually went anywhere. No pun intended. She's the "second sidekick" here, who has an overbearing husband that freaks out when he sees she's not at home one afternoon with the kids, and learns she left them with the babysitter. We see her later getting ready for a party and confesses the husband "is a never hard" (take a second let that sink in) which leaves the audience thinking the joke will play out one of two ways; either him being gay or having an affair. The gag rolls into a completely different direction in the last few seconds of the film, as if the writers had forgotten all about it.

what did I learn?  Penis jokes will always be funny

Posted by Domestic and Damned at 3:15 PM