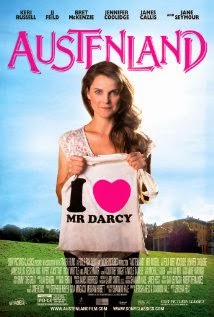 plot: Jane, a thirty-something woman decides to spend her life savings on a Jane Austen themed vacation, after her ex-boyfriend dumps her then insults her by saying he's as good as she'll ever find at her age. The vacation promises an authentic experience from the Austen/Regency era, with a happily ever after the last night. While she's there, Jane ends up being the center of a love triangle, not sure if it's the real deal or just part of the act.

This is based on the book of the same name.

There are elements and scenes out of every Austen novel/movie adaption used here, from the poor girl being taken in by rich relatives, to the group putting on a play to kill time (Mansfield Park) to the quiet reserved gentleman who falls in love with the heroine while trying to keep her safe from the brash cad (Pride and Prejudice) to the endless match making of the seemingly wrong people some of whom are only in it for the wealth (Emma, and  Northanger Abbey)  to the misunderstanding between the young couple who are being kept apart by other people (Persuasion) to simple manners (Sense and Sensibility)

I'm going to say that I both loved and hated this film. As a Jane Austen fan, I thought it hit every note from her novels with bang on clarity. As someone in that age bracket, it hit just a bit too close to the nerve for me. It was almost too bang on.

Jane Austen's novels have inspired more then just wishful thinking, when it comes to love, they have created the baseline for almost all the romance stories and romantic comedies to come out in the last two hundred years.
This movie really points out the line of finding the balance between the man we want and the one we usually find, as well as the idea of keeping your own values while trying to compromise with the other person in the relationship/situation.

There is a scene at the end of the movie where the three main characters are hashing it out in an airport, the two men each pointing out the other's weak spots while trying to convince Jane that she should believe them.

At one point, we see Jane decide she has to take control of her "story" while on vacation, otherwise she's never going to find the happy ending she's been promised. This is the turning point for her in more ways then one, we start seeing her break from the role given her by the hostess, and in turn it gives some of the other guests permission to act more themselves. Not always with good intentions.

Posted by Domestic and Damned at 9:29 AM