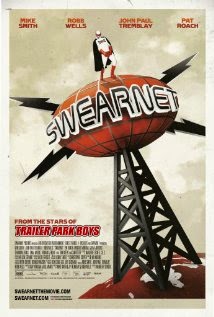 plot: After the Canadian Network turns down all their ideas, the four main actors who made the Trailer Park Boys household names, decide to branch out and create their own internet network. Mike (Bubbles) has borrowed money from a loan shark and has 48 hours to pay him back, meanwhile, Robb (Ricky) is trying to save his relationship, and J.P. (Julian) just wants to run a car race to honor his dead father. And during all this, Pat (Randy) is tricked into making a spectacle out of himself.

WARNING!!!
You will see Pat Roach's full naked c**k for a few long moments, and hey, that's fine, slightly funny. There is a ton of c**k talk in this movie. Also cool.

If you're a fan of the TPB, (which you don't need to be to find this interesting) then you will see a small parallel to the character of Conky that Bubbles carries around for a few episodes, and the idea of JP carrying around an action figure through the whole film (with his dad's ashes in it)

I noticed in the listing that the actor who plays Cory was listed as being in it, I didn't see him. Though I missed a few minutes due to a bathroom break. So, he might have been on screen. The end hints at another few seasons of TPB after the credits, so that's almost a bonus.

What else can I say without adding too many spoilers?  Sebastian Bach is in it. Totally rocks (no pun intended) and it makes a nice connection to the series as he did a few episodes. Tom Green is in it, which makes sense given he's Canadian.(raise your hand if you remember the song "check the O.R, you like it so far...")  There was an actress from soap opera Young and the Restless, who at first I had no idea why she was there, but turns out she's Canadian, so makes sense. And Carrot Top. Yeah, I have no idea why he was added?

This is something I would love love love to f***ing see a sequel to.  And I was really expecting to get a f***ing  keychain as I left the cinema...(Tom Green's big line was "I'm handing out keychains")

Posted by Domestic and Damned at 7:26 PM