Alrighty then. You my lovely Spudguns! might remember I said last month that I was going to start up the vampire movie club again on here. Plus, a vampire book club. Cause I'm frightfully groovy.

I'm kicking it off with having selected the new remake of Twilight for the book portion; Life and Death Twilight Reimagined.   And the original Twilight dvd for the movie portion.  Big shocker there eh? 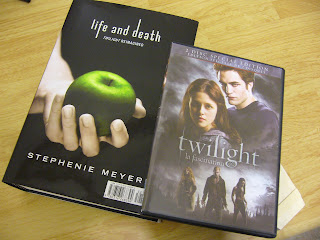 The Book :  Beau just moved to the small town of Forks to live with his dad after his mother's new husband who is a baseball player, is traded to another team. On his first day at a new school, Beau meets Edythe Cullen, a strange girl and her adopted siblings. After a sudden freezing rain has caused the school parking lot to be icy, causing a near fatal accident by a student driver, Beau is rescued by Edythe. He then begins to question if his new crush is just eccentric or if there is something more supernatural going on? His friend Jules Black, a member of the Quileutes, fills him in on an old family legend about how vampires crossed paths with members of his family decades before, and how the Quileutes came from wolves. Beau while on a trip out of town, once again ends up in a near accident, as Edythe appears rescuing him, forming the first real bond between them. The two teens head back home, believing the only danger they have to face are their families' disapproval, when a second group of vampires are spotted at the city limits. The leader of the new vamps, has set her sights on Beau and refuses to let anything or anyone get in her way of the hunt.


I really liked this new version of the book. I think the big change of having it be from a male's point of view made it more interesting, and dare I say less stalkerish. It didn't have the same heavy tone of creepy psycho-abusive boyfriendness that the original did.
And the ending...for those who haven't read this updated version and might want to, I'll spare the spoilers and just say, the ending is far superior than the original ending. This alternate ending actually undoes the need for Breaking Dawn in the book series. Completely removes it.

The character of Edythe for me, was a little papery. But at the same time she gives off this seductress quality. I'm going to put that down to the whole vampire predator element. Which, ironically, is pointed out more then you would expect. I got the impression she was having way too much fun trying to find ways to frighten Beau off; which I can't honestly remember there being in the original. She's just that touch more sadistic then I ever remember her counterpart in the original being. There is also this feeling of complete desperation from Edythe, much like there was from the original version's Bella. Where the Beau/Bella character is meant to be the big damsel in distress; I didn't always get the white knight vibe from Edythe/Edward character. Both versions have the females (Edythe in this one Bella in the original) as very greedy emotionally. The character of Beau, I found to be more stable then the original Bella was. Maybe because he was a guy, he was written with a tad more of a logical approach, as there just seemed less desperation from him then I remember from the original version.

The Movie: After moving to a new school, Bella Swan develops a crush on the school's most aloof student Edward Cullen. Even though he at first rejects her, she begins to dream about him. After an accident in the school parking lot, Edward makes it his job to keep Bella safe, even at the risk of angering his siblings. Before long, the two can not avoid each other or their own feelings. Meanwhile, a series of brutal murders have taken place in the area, and Edward's family are on edge because of it. Bella is then caught in the middle of a vampire turf war, unaware she is the ultimate prize.

I've talked about the first Twilight movie before (first year of the blog Day 41) and I've expressed over the years since the movie first came out, my love/hate/love/hate relationship with it.

So my big pro for the whole thing is that when the first Twilight came out, the vampire genre needed a change.  You've heard me say many times in the last few years, that Twilight helped to clean up the genre. The vampire is a great metaphor for pretty much everything and the last few decades it had gotten locked in with just sex.Yes, we know that some of the best vampire fiction is in direct connection to the subject or sub-plot of sex (usually in the form of sexual awakening/freedom) But, the mid 1990's till just a couple of years ago, the image of the vampire lost it's ability to be used as a metaphor for anything else. Many would argue that it still is being used that way in the whole Twilight series, and I'm not arguing that it is. But it's also being used as a metaphor for addiction, loyalty and ironically veganism.

The cons to the movie, besides the fact Bella Swan is one of the most annoying characters to ever grace a screen, the movie takes way too long to get to the good stuff. The introduction of the second band of vampires, the nomads lead by James, is a plot device I would have moved up in the film, expanded on myself. The movie holds too much time in the everyday limits of the high school mentality.
Another of the movie cons, is that it seems to bring out the whole brain washing cult feel of the Cullens more so then the books ever did. Yes, we're playing with the idea of the whole sire bond, but where's the depth in it; the emotions?
I know I'm not the only one who sees deep ideas in the movie version of Twilight that are similar to Anne Rice's works. But, Rice handled it differently. There's no heart in the story here. It's like the surface of Edward's skin, shinny but useless in the shadows.

I have to admit watching it this time, I couldn't get past Edward's hair. Every time I would look at his character on screen, all I could think was why did they choose to do that hairdo? I also thought that they really made the vampires a tad on the ugly side with the make-up. It didn't have the usual effect the heavy "pale" vampire make-up normally gives. I kept wanting to change the colour features on my screen to lighten the look of the make-up.

I think I'm going to stop here. As I said before, I've got a love/hate relationship with the whole series.


February's selections will be  Abraham Lincoln Vampire Hunter.   Both for the movie and the book. And the deadline for that one will be Sunday Feb 28th 2016.

So, we'll be blogging about that movie and book and if you've been inspired to craft/bake/cook something because of it, let us know. And as this one was, it must be a current blog post if you are joining in. (February 2016)

And if you're in the Thunder Bay area, and would like to join the physical book club, let me know.

Posted by Domestic and Damned at 7:36 AM