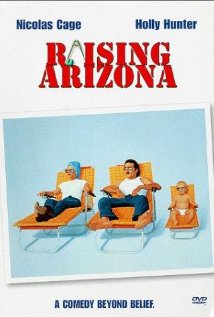 plot: After learning they can't have children, a former convict and his wife steal a baby from a wealthy family. But before they can settle in, two of his former inmates show up stealing the baby themselves.

This is a dark movie. For all the comedy, it really is a film about exposing the underbelly of what people are really like. From the whitewashed lecherous boss, to the kind hearted criminals. You see what people are willing to do to complete their dreams.

You're left wondering if the bounty hunter is real or a projection of High's own guilt? They both carry the same roadrunner tattoo in the same place, and in the scene where the bounty hunter is being hired, the father of the missing kid accuses him of stealing the baby in the first place. Then High has to go to extreme measures to rid himself of the bounty hunter, which leads to the only way he can clear his conscience.

This is one of those movies that normally I would say is "a product of it's time" simply for the crudeness of the jokes, but I can't say that because it seems to be written specifically to expose it's own crudeness.  Did I like it? There were moments where I thought it was a brilliant movie, but to be honest, not something I would want in my collection.

What do I think I learned from this movie: Nothing is ever just the sum of it's parts.

Posted by Domestic and Damned at 7:32 AM