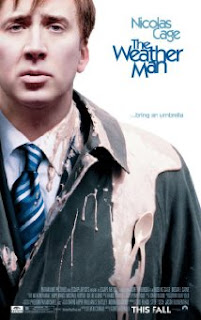 plot:A local weather man gets the chance  to expand his career into the national scene, only it arrives when the rest of his life is falling apart.

The lead character starts off the film in what we first think is a mess of self-centeredness, but as we continue to watch, discover it's not that he doesn't care, it's that no one will open up to him. His father is dying, his ex-wife moving on with her life, his son is dealing with an abuser, and his daughter has no clue.

At the heart of this film is family, and how twisted things can get when you stop paying attention.  I like the scene where he realizes that it's all fast food he keeps getting smashed with, and how he reevaluates how he is seen by others and himself.

What do I think I learned from this movie? Life is tricky, usually messy; even more so when you're not communicating.
Posted by Domestic and Damned at 8:06 AM