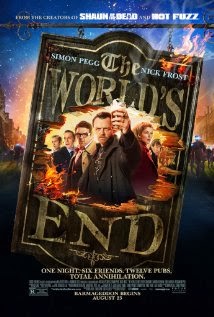 plot: Five friends who try to re-do a pub crawl they never finished twenty years later. Only, they find that they're the only people in their childhood town who have changed. What they discover is the town has been replaced by alien robots.

This ended up being a heavy movie for me.  What started off as a light comedy about drinking and reclaiming the past, quickly turned into a hard long look at how many of us can't let go of things. Then it quickly turned into a bunch of guys fighting robots with ink for blood.
I did like the little jokes that they are trying to reach the last pub only there's nothing there for them but the aliens, along with  the nod to Star Trek; with the "Network" being an obvious stand in for the Borg as well as the fact Pegg plays Scotty  in the latest versions of ST. (Trek 11 and 12 as of this post)

There is a bit of everything going on in this film. It's a buddy movie, it's a romantic comedy, it's an action film, it's a comment on addiction, it taps at the way society longs for sameness while fearing change.  I did feel like this film rushed the ending though. It chugs along at a decent pace for the first hour and ten minutes, then just seems to run out of speed making the ending feel thrown at you.

This is the third installment in the Three Flavours Cornetto Trilogy (Shaun of the Dead and Hot Fuzz being the other two)... so named for the fact that brand of ice-cream is in each film.

What did I learn?  I found myself identifying with the lead character played by Pegg just a bit too much. Which to be honest scared the crap out of me. There is a scene where four of the characters are talking about physical scars vs emotional ones, with the Frost character pointing out that sometimes they are so connected you can't tell them apart. You just can not separate the emotional side of the accident that caused the physical scars, that they haunt you so much it ripples into the rest of your environment/life.

Posted by Domestic and Damned at 3:50 PM